Secularist conference to explore ‘21st Century RE for All’ 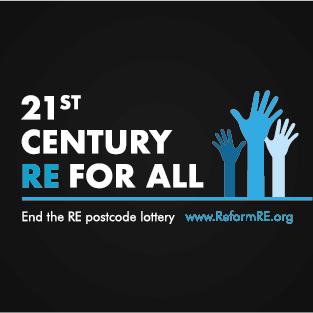 The National Secular Society is to hold a one day conference on reform of religion and belief education in schools, with speakers to include Prof. A. C. Grayling.

The conference will take place at Conway Hall in Central London on Saturday 14 April, and takes its name from the NSS campaign to reform RE. The campaign aims to bring RE into line with other subjects by ending local determination and introducing a balanced curriculum in all schools drawn up by educationalists, not faith groups, and inspected consistently by Ofsted.

Speakers include NSS honorary associate Prof. A. C. Grayling, who will offer a philosophical perspective on 'Learning about worldviews'. A panel of experts from the RE community will offer a range of opinions on what '21st Century RE for All' should mean. There will also be a series of roundtable discussions, for attendees to get involved with.

Panellists include: Dr Keith Sharpe, chair of the Secular Education Forum and a former professor of education; Alan Brine, former Ofsted national adviser for religious education; Kate Christopher, RE Today's national adviser who is completing a PhD in Philosophy of Education; and Martha Shaw, a senior lecturer in education at London South Bank University and an author of REforReal.

Education and schools officer Alastair Lichten said: "We hope this event will be an exciting opportunity to bring different groups together. Whether you're a teacher of RE who wants to bring balance and best practice to the classroom; an academic working on reform; a parent concerned about proselytisation; or an activist challenging religious groups' privileged control of the subject, this conference will have something for you.

"Although the reforms we argue for are widely supported in the RE community, there are powerful vested interests that see RE in schools as 'theirs'. Some who accept RE shouldn't be used to promote their faith, still see the subject as about promoting the idea of faith more generally.

"We hear a lot about problems in RE, vestiges of confessionalism, a narrow focus, poor inspection and confusion over its aims. But it's worth remembering there is a lot of good practice out there, parents, pupils and teachers are interested in exploring worldviews in a balanced, critical way, and in an education that prepares young people for life in 21st century Britain."

Find out more Book your tickets