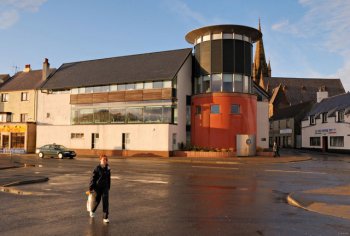 The cinema on the Isle of Lewis has opened on a Sunday for the first time as it held a trial screening in the face of Sabbatarian opposition.

The An Lanntair arts venue in Stornoway sold out as it showed Star Wars: The Last Jedi this weekend. Around 250 people watched the film while others built a model Death Star at a workshop.

An Lanntair has traditionally closed on Sundays, along with other businesses on the island, to ensure observance of the Christian 'sabbath'.

Elly Fletcher, the centre's chief executive, told BBC Scotland no decision had been made on whether to open the centre in the long-term. She said the trial opening was a "very genuine audience research exercise".

"Sabbath observance is something very important to the Isle of Lewis... we are mindful and respectful of that."

The National Secular Society's spokesperson in Scotland, Alistair McBay, welcomed the initial opening and said he hoped it would set a precedent.

"Congratulations to all at An Lanntair for standing up for freedom from religion. Hopefully in years to come many more Lewis residents will be able to enjoy their weekends as they wish, rather than having their plans dictated by self-privileging religious bullies."

Two protesters gathered at the screening to condemn it. Rev James MacIver, of Stornoway Free Church, said Sundays gave people time for the "spiritual side of their lives". He also claimed it would have been "better" if the church had been consulted before the decision was made.

"I think it is better when there are things that impact on other important services in the community that one should discuss them," he said.

Mr McBay rejected that statement. "This is a sinister suggestion dressed up as a reasonable one. Businesses should feel no obligation to ask religious groups whether they may or may not open. If the religious do not like Sunday opening, they are under no obligation to attend."

At one point 'sabbath' observance on Lewis, which has a strong Presbyterian heritage, was so strict that park play swings would be chained up on Saturdays at dusk. Those who weren't particularly devout would also refrain from gardening or putting washing out to dry lest it offend their more observant neighbours.

In recent years there has been a measure of liberalisation. In 2002 the first Sunday commercial flight landed at Stornoway. CalMac ferries first sailed in and out of the island on Sunday 19 July, 2009.

But the local authority leisure centre in Stornoway remains closed on Sundays, despite campaigners raising money to open it. Many businesses, such as Stornoway Golf Club, still close on Sundays.

And in November the NSS reported that a group called Day One, formerly the Lord's Day Observance Society, was harassing and intimidating those which opened. In one example which captured national attention, the owner of a shop in Stornoway was shouted at and sent letters and a bible over her decision to open on Sundays.

The NSS has welcomed plans from the Scottish government to incorporate the United Nations Convention on the Rights of the Child into law....