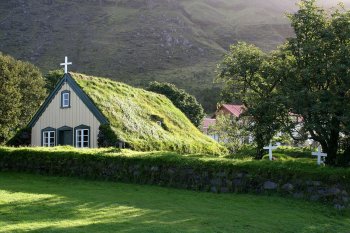 More than seven out of ten Icelanders who have an opinion on the separation of church and state support the idea, a poll has found.

The poll, which was conducted on behalf of Siðmennt, the Icelandic Ethical Humanist Association, found that 72% of those who expressed a view supported the full separation of church and state.

Currently the Icelandic constitution stipulates that the state church of Iceland is the Icelandic Evangelical Lutheran Church. As of last year, about 75% of Iceland's inhabitants were registered members of the Church. Until 2013, newborn babies were automatically registered with their mother's church. Additionally all Icelanders, including the non-religious, have to pay a tax that is distributed among 40 religious institutions including the Evangelical Lutheran Church, so there has been little incentive for Icelanders to leave the Church officially.

The poll also found that Iceland is becoming increasingly irreligious. Less than half (46%) of Icelanders claimed they were religious, the lowest figure to date. Twenty years ago nearly 90% were religious. More than 40% of respondents aged 25 or younger said they were atheist, and none of them believed the world was created by God.

In all but the oldest age category a majority accepted the big bang theory. Forty-six per cent of those older than 55 accepted it, while 25% believed God created the world.

According to Boasdottir, the study has been widely discussed by Icelandic priests on Facebook. "As far as I have seen they are [neither] surprised nor [shocked by] the results. They see no necessary opposition between believing in God and accepting scientific theories on creation of the world."

One religion that has seen significant growth is Zuism – a Neopagan religion based on the worship of Sumerian gods. In 2017, almost 1% of the country's population (about 3,000 people) had signed up to Zuism. The Zuist church pays back to its members the amount of money they are taxed to pay for religious institutions (about £58 per year).