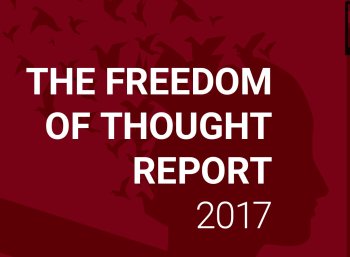 The idea that secularism and human rights will inevitably establish themselves should be "cast aside as deeply complacent and apathetic," according to a new report.

The 2017 Freedom of Thought Report, from the International Humanist and Ethical Union (IHEU), says free thought on religious issues is in "a pattern of regression on a global scale". It adds that persecution of the non-religious is increasing and 85 countries – more than four in ten of the world's total – 'severely' discriminate against non-religious individuals.

In 30 of these countries, there are 'grave' violations. These include: "complete tyranny" on free expression; state legislation being "largely or entirely derived from religious law or by religious authorities"; religious indoctrination being "utterly pervasive" in schools; expression of non-religious views being "severely persecuted" or "rendered almost impossible" by social factors; or advocating secularism being outlawed.

Islamic states and countries which have either mainly Muslim populations or predominantly Muslim geographical areas dominate the list of countries with grave violations. In some cases states support persecution of the non-religious; in others there is impunity for the murder of those who deviate from official religious doctrine. In 22 countries laws punish those who change their religion; 12 of these issue the death penalty.

The report partly blames this on governments, but adds that "many of the pains and oppression faced by the non-religious in such countries results from social intimidation, including pressure from schools, family [and] friends".

It also warns that the number of anti-atheist murders and other incidents of persecution are increasing. These incidents, it adds, are merely "the most noticeable moving parts on the extensive machine of anti-non-religious discrimination" globally. In many countries 'blasphemy' is imprisonable; fundamentalists proselytise in state-run schools; state laws are derived from religious doctrine; and religious courts control family and personal status law.

"Free thought on religious issues is an indispensable element of any free society, so the global threat to secularism is a threat to freedom itself. Historically those who have questioned religious orthodoxy have been crucial to the advance of reason, tolerance and the human race's prospects.

"Secularism must be both defended and actively promoted. It's essential to stand in solidarity with, and protect, those who face persecution simply for questioning religious orthodoxy. The UK Government must give this a very high priority in its dealings with foreign powers."

IHEU says new trends identified this year show the active persecution of freethinkers in seven countries – India, Malaysia, Maldives, Mauritania, Pakistan, Saudi Arabia and Sudan. Atheists and humanists have been murdered in Pakistan, the Maldives and India. In Pakistan several activists have 'disappeared' or been prosecuted for alleged 'blasphemy'. Two men face a possible death sentence.

Andrew Copson, IHEU's president, said the organisation was increasingly aware of people who were unable to speak out about their views on religion.

"They are afraid they're going to be attacked for it, maybe even killed. This report shows that this is not an irrational fear. There have been extrajudicial killings occurring in multiple countries and near impunity for the killers. The international community cannot continue to placate states which criminalise leaving religion as a capital offence."

The report's introduction is written by Ensaf Haidar, the wife of the imprisoned Saudi blogger Raif Badawi. "No one anywhere should face such trial just for expressing their view of the world," she writes.

"Freedom of thought and expression are our human rights. I reject the idea that anyone, or any state, has the right to threaten someone with death just because they believe or don't believe in any religion.

"I reject the idea that just because someone thinks critically about any aspect of religion they deserve to be prosecuted, still less to be imprisoned, separated from their children for years and years and years."

The report will be launched at the European Parliament today.