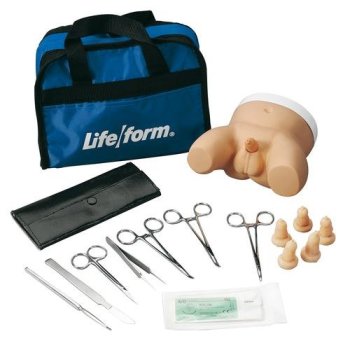 Amazon UK has confirmed it has withdrawn infant circumcision training kits from sale over child safety concerns following a National Secular Society request to do so.

The Society said Amazon risked normalising unnecessary and risky surgery by allowing a group called ESP to sell the kits on its site. In a letter Dr Antony Lempert, the chair of the NSS's Secular Medical Forum, asked Doug Gurr, the chief executive of Amazon UK, to remove the kits from sale permanently.

"Male circumcision in the UK is wholly unregulated and we fear that the sale of this product may encourage unqualified practitioners to carry out unnecessary surgery on infants in non-clinical conditions, resulting in serious harm," Dr Lempert wrote.

"Non-therapeutic circumcision is unethical and unnecessary and is putting infant boys at risk of death and serious injury. This practice could be encouraged by the morally negligent sale of infant circumcision training kits to the public."

It is unclear whether Amazon's decision, which has been reported in The Independent, is permanent. Similar kits remain on sale (in white and black) on its US site. An Amazon spokesperson told the NSS that these cannot be imported to the UK.

In the UK the kits were priced between £365.16 and £456.60. They included mock torsos with genitals, scissors and scalpels. One was advertised as including "the foreskin, glans penis, frenulum, meatus and coronal groove".

The sales pitch on the Amazon website, which came from a third party seller, said the kits were "made with soft, lifelike material, which is pliable, delicate, and realistic to the touch". They were sold in a variety of colours, and several associated accessories were also on sale separately.

The NSS questioned whether allowing the sale of such items was consistent with Amazon UK's Supply Chain Standards policy, which requires sellers to process the risks of the items they sell. It also voiced concern that the sales pitch for the kits suggested circumcision is done primarily for health reasons.

Dr Lempert also said the sellers had misrepresented the health benefits of circumcision. "No medical association in the world actively recommends routine infant male circumcision for health reasons," he wrote. "Any associated claims for medical benefit of surgical training equipment should be accurate."

The NSS, which campaigns for non-consensual, non-therapeutic circumcision to be outlawed, welcomed Amazon UK's decision to remove the kits from sale. Its chief executive Stephen Evans said: "No child should be subjected to unnecessary medical surgery. The morally negligent sale of infant circumcision training kits to the public normalises this form of abuse and risks encouraging it.

"A growing number of medics and lawyers are questioning forced genital cutting and recognising the need to safeguard boys from this unethical practice. Religious freedom is not an absolute right and certainly doesn't justify the amputation of healthy, functioning body parts from babies' bodies."

Although data is limited, infant circumcision has been linked to serious injuries and deaths. In 2009, the emergency department of Birmingham Children's Hospital admitted 105 boys for circumcision related injuries. In 2011 the same hospital admitted 11 baby boys aged 0-1 years old to their paediatric intensive care unit with life-threatening complications directly caused by circumcision.

In 2012 a nurse in Oldham was found guilty of manslaughter after killing a baby boy in a botched circumcision two years earlier.

The British Association of Paediatric Surgeons has said there is little if any reason to circumcise boys under five years old. In January 2015 the head of the family division of the High Court in England and Wales, Sir James Munby, said non-therapeutic infant male circumcision caused "significant harm" to boys.

This week, Manoj Shenoy, president of the British Association of Paediatric Urologists, told The Independent that the training kits "are not medically appropriate" and said he had concerns they could increase unregulated circumcision.

There is also a growing international medical consensus against ritual circumcision. In September a Belgian federal government committee ruled against the circumcision of infant boys for reasons other than medical necessity.

In 2010 the Royal Dutch Medical Society (KNMG) urged doctors to adopt "a strong policy of deterrence" on infant male circumcision, which it called "a violation of children's rights to autonomy and physical integrity". KNMG said any medical advantages of circumcision were significantly outnumbered by the risks and other disadvantages, such as the loss of up to 30% of erogenous tissue.