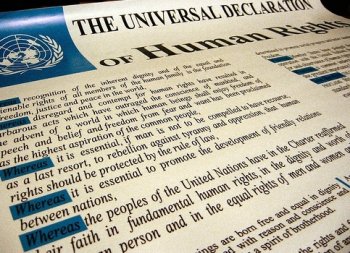 The National Secular Society has warned that human rights in the UK - previously guaranteed under EU charters - are now under unprecedented threat.

As parliament continues its line-by-line examination of the complex EU Withdrawal Bill - which will transfer EU law into UK law so that it can then be reviewed by MPs after Brexit - the NSS has been working diligently to protect human rights.

We have been working with parliamentarians, the Equality and Human Rights Commission, the parliamentary Joint Committee on Human Rights (JCHR) and the Repeal Bill Alliance - an ad hoc group working in Parliament - to prevent the erosion of currently enjoyed rights that had previously been regarded as unalienable. The NSS is neutral on Brexit, but keen to ensure the UK's withdrawal from the EU does not lead to any dilution of human rights.

The NSS has warned parliamentarians that the motivation of some of those leading the charge to prevent the EU Charter of Fundamental Rights being codified into UK law could be to elevate religion above other protected characteristics. Leading conservative MP Sir Edward Leigh, supported by fellow veteran Sir William (Bill) Cash, told the Commons on Tuesday (in cols 914/5): "The advancement of European so-called human rights has been to the detriment of the rights of other people, particularly religious people, to find their own space, because European equality laws trump all other laws. When we regain parliamentary sovereignty ... we can start asserting the right to real human rights." [emphasis added.]

A spokesperson for the NSS said such claims were "untenable", as the principle of anti-discrimination has been repeatedly endorsed by the UK parliament.

The NSS has been the first to raise a key concern: the importance of being able to continue to ignore aspects of, often long-standing, UK legislation which are not compliant with EU directives. The current proposals do not cater for this. UK law still permits, for example, unfettered discrimination against the employment and dismissal of non-religious teachers in faith schools. Such unfettered discrimination is currently unenforceable because it conflicts with an EU directive. We are calling for non-compliant legislation to remain unenforceable post-Brexit.

Other recommendations we made to the JCHR in a recent submission included:

- UK human rights should be protected from erosion by simple parliamentary majorities. Most countries guarantee human rights in their constitutions, which are deliberately difficult to amend.

- EU directives - including their preambles - and EU Charter of Fundamental Rights should be incorporated into UK law. This is not currently being proposed and some of the rights they confer risk disappearing overnight.

- Currently, EU agencies and reporting requirements on governments help to ensure human rights are monitored and enforced. Realistic alternatives should be found to replicate both as quickly as possible. The EHRC is an obvious candidate agency.

- EU law is being introduced wholesale into UK law using statutory instruments (SIs), a form of secondary legislation that are rightly dubbed 'Henry VIII' powers, as the Government can draft them in any way they please. These should be restricted where they lead to a depletion of human rights. The process whereby SIs could be amended is currently dysfunctional; it is almost unknown for them to be challenged. At least where this relates to SIs involving human rights, this process must be radically improved to permit proper scrutiny.

Keith Porteous Wood, executive director of the NSS, said: "Brexit was represented to be the repatriation of power to Parliament, but it risks becoming the opposite: the delegation of power by Parliament to government, and on an unprecedented scale. It would be foolhardy to delegate power on such a scale to any government, but especially one that has just tried to sneak through the withdrawal of the right to sue the government. Even worse, despite all the rhetoric to the contrary, unless radical changes are made, significant human rights protections currently enjoyed will disappear on Brexit without any agreed alternative."

"Please write to your MP to emphasise that human rights must not be depleted with Brexit, even temporarily. A suggested letter appears here and you may wish to supplement it with information contained in our submission to the JCHR."