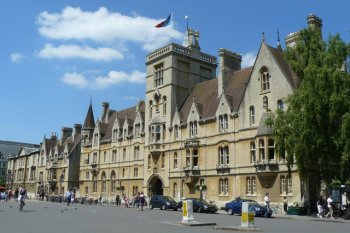 Organisers have agreed to allow the Christian Union to exhibit at future freshers' fairs at an Oxford college, following an earlier decision to ban it from attending.

The student organiser of the freshers' fair at Balliol College had decided to ban representatives from the Christian Union, on the grounds that their presence could cause "potential harm" to freshers.

Freddy Potts, vice-president of Balliol's Junior Common Room (JCR) committee, said, "Historically, Christianity's influence on many marginalised communities has been damaging in its methods of conversion and rules of practice, and is still used in many places as an excuse for homophobia and certain forms of neo-colonialism."

Mr Potts initially said that the JCR committee wanted the fair to be a "secular space", explaining that students from religions not represented at the fair may "suffer". He later conceded that a "multi-faith" stall with information about various student religious societies would be allowed at the fair. However, representatives of the Christian Union were barred from attending and distributing leaflets.

The ban prompted outrage among students. The JCR passed a motion condemning the organisers, saying that the ban was a "violation of free speech, a violation of religious freedom, and sets dangerous precedents regarding the relationship between specific faiths and religious freedom".

Since then, the students have withdrawn the ban on religious groups at future fairs.

A college spokesman said: "The Christian Union will be offered a stall at future freshers' fairs.

"Balliol is a tolerant, friendly college where students of all faiths and none are free to worship and express their beliefs openly."

The National Secular Society backed the decision to allow Christian Union and other religious groups to attend future freshers' fairs at the College, arguing that "religions should be free to compete in the marketplace of ideas".

Stephen Evans, Campaigns Director at the NSS, said, "The ban on the Christian Union had nothing to do with secularism and everything to do with the censorious 'safe space' mindset that seeks to create echo chambers of like-minded thought.

"Attempts to create environments where students aren't exposed to ideas and speech that make them feel uncomfortable is corrosive to free speech and inimical to intellectual exploration and debate."