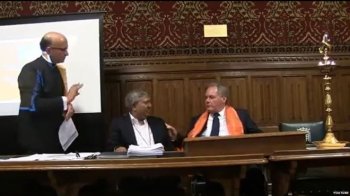 The Charity Commission is to investigate a Hindu organisation after it invited a controversial Hindu nationalist to a House of Commons event.

Southall Black Sisters and the Women Against Radicalisation Network are among those calling for National Hindu Council of Temples (NHCT) to lose their charitable status over their promotion of Tapan Ghosh.

The open letter to the Charity Commission, also supported by the Association of British Muslims and the Asian Mums Network, criticised the NCHT for inviting Tapan Ghosh to speak in Parliament, saying the event was aimed at "stirring up religious hatred in Britain" and that the organisation "should be stripped of its charity status".

Mr Ghosh appeared at event in Parliament on 18 October, hosted by the NHCT and Conservative MP Bob Blackman, called "Tolerating the Intolerant". According to the Times, Mr Ghosh was the keynote speaker and talked about his West Bengal based Hindu Samhati, referred to by some as a "Hindu Defence Force". Such groups have been implicated in violence against Muslim minorities, including rising mob violence against those eating or accused of eating beef.

The National Secular Society welcomed the investigation, warning that Hindu Nationalism or Hindutva was a "divisive far-right religio-political ideology, akin to Islamism".

Mr Gosh is on record calling on the United Nations to control the birth rate of Muslims and has previously been accused of promoting anti-Muslim conspiracies, praising the genocide of Rohingya Muslims in in Burma, and calling for Muslims to be forced to convert if moving to a western country. He has also tweeted that "All Muslims are jihadis". Mr Gosh and the NHCT have been accused of developing links with other far right nationalist movements, and last week Mr Gosh took part in an interview with former EDL leader Tommy Robinson.

Mr Blackman defended Ghosh's appearance to BBC News last week, saying that Mr Ghosh's talk had not focused on anti-Muslim issues, and that he did not regret sharing a platform with him.

The National Council of Hindu Temples has been investigated by the Charity Commission before for appearing to endorse the Conservative Party in the 2015 and 2017 general elections. In both cases perceived Labour support for outlawing caste discrimination was seen as a significant factor. Bob Blackman, the MP for Harrow East, is chair of the All Party Parliamentary Group for British Hindus and a vocal campaigner against efforts to outlaw discrimination based on the idea of caste.

A spokesperson for the NSS commented: "Many faith-based charities carry out good work, but it is unclear why some groups receive charitable benefits merely for the promotion of religion, especially when they are also involved in partisan politics and the spread of sectarian hatred."

Image is a YouTube still from one of the events, with Tapan Ghosh centre and Bob Blackman MP on the right.