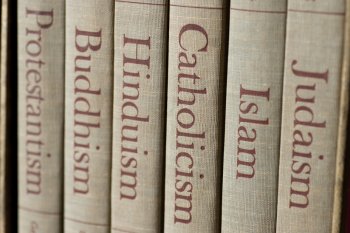 The National Secular Society has called for a 'fundamental rethink' about religious education after new research revealed that a quarter of England's secondary schools are not offering the subject to their students.

The data has been gathered by the National Association for RE Teachers – who say they are increasingly concerned about the lack of provision, which is a statutory requirement.

They say that academies are struggling more than local authority schools – with 34% not offering RE to 11 to 13 year olds and 44% not offering it for 14 to 16 year olds.

National Secular Society campaigns director, Stephen Evans, said the findings should prompt a "fundamental rethink" of the subject. "If so many schools aren't valuing this supposedly compulsory subject, that tells you that it either shouldn't be compulsory at all or that it needs serious reform", he said.

"The credibility of RE is seriously undermined by its content being decided locally, primarily by faith representatives. With its unclear purpose, archaic structure and vestiges of confessionalism, it's little wonder schools are sidelining it.

"Fundamental reform is needed to ensure that all pupils have the same entitlement to high quality and non-partisan education about a diversity of religious and other beliefs. Importantly, faith schools must lose their ability to teach a narrow version of RE from their own faith perspective. No school should be permitted to use the subject to enforce a specific religious doctrine.

"Organised religion's undue influence over this area of the curriculum is stymieing progress and denying young people the rounded, objective and relevant education they should be entitled to."

Under the existing legal framework, faith schools are permitted to teach subject in accordance with the tenets of their particular faith. Most non-religious schools follow a locally agreed syllabus which is determined by committees largely made up of faith representatives. Academies, however, are free of local authority control and can also choose their own RE curriculum.

The NSS said the findings add weight to its campaign for a 21st Century RE For All.

The campaign aims to ensure that every pupil has the same entitlement to high quality, non-partisan education about religion and belief which teaches students about the diversity of religious and non-religious worldviews.

The NSS says it wants to end the arbitrariness and unfairness of 'local determination', and for the subject content to be taken out of the hands of "vested interests". It instead wants to see national framework for religion and belief learning, devised by educationalists without a religious agenda.