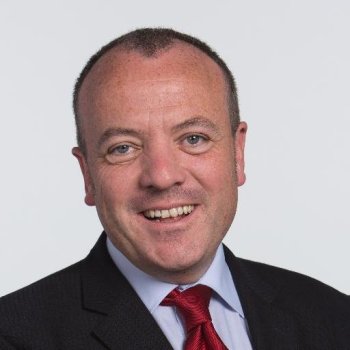 Eight Labour MPs have launched a group calling on their party to "explore and supply" the application of Catholic social teaching to public policy.

'Catholics for Labour' was launched at a mass on Sunday at a church in Brighton, where the party is currently gathered for its annual conference.

In a letter the founders said they would be "guided by the teaching of the Catholic faith" and had "lofty ambitions". And at the mass Raymond Blake, a priest who gave a sermon, accused some of the MPs present of having "appalling voting records on life issues".

The group's leader Mike Kane (the MP for Wythenshawe and Sale East, pictured) is a Shadow Minister for Schools.

"I've always seen my politics as inextricably tied to my faith," Kane said. "I truly believe there is a natural connection between Catholicism and the Labour movement. My desire to help those who have fallen on hard times all stems from my Catholic upbringing."

Kane said Labour would ignore Catholic voters "at its peril" and told The Tablet: "our core theme is participation and getting Catholics to participate in the public sphere".

Labour has historically had strong support from Catholics: at one point in the 20th century it led the Conservatives by 40% among those voters. But its support has waned significantly since 1997. At the last election its lead among them was 2%. More than half of Catholic voters in Scotland have abandoned Labour for the SNP.

"Catholics are no longer a voting group in thrall to their Church," said National Secular Society executive director Keith Porteous Wood. "Some studies suggest they are even more socially liberal than the rest of society."

Labour currently faces a series of questions about its commitment to secularism. Last week Mr Porteous Wood said there had been "a deafening silence" from the party's leadership on the issue of a caste discrimination law. In March party leader Jeremy Corbyn said the counter-extremism strategy, Prevent, had been used to "target the Muslim community". Critics say similar claims by Muslim 'community leaders' are often spurious and undermine counter-radicalisation efforts.

Responding to the formation of Catholics for Labour, NSS president Terry Sanderson said: "It is never good to mix politics and religion and sometimes it is dangerous – however benign the motive is claimed to be.

"Not all the constituents of these MPs are Catholic. If they were aware of this new direction, many would be suspicious that down the line more conservative and intolerant policies would follow.

"The question now remains: did the constituents who voted for these MPs know that they intended to introduce a Catholic agenda into their policy-making?

"One of those named is my own MP and although I knew he was a Catholic and occasionally acted to please his Catholic voter base, I had no idea that he intended to formalise his intention to introduce his religious loyalties into policy-making.

"They should be more upfront and straightforward with the people who have given them this platform. I would hope that at the next general election they will all state quite clearly in their manifestos that they are members of this group.

"We will be watching them very closely."