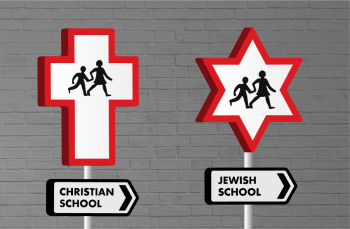 A new £17m campus which houses Catholic and Jewish faith schools together has opened in East Renfrewshire.

St Clare's Primary, a Catholic school, will share its premises with the Jewish Calderwood Lodge and a non-denominational nursery class. The campus in Newton Mearns, near Glasgow, will include features such as a shared central amphitheatre, outdoor obstacle trails and two sports pitches.

East Renfrewshire Council welcomed the news of the joint campus. "By sharing ideas and knowledge, all our pupils at this new joint campus will enjoy an enriched learning environment," said Paul O'Kane, the council's convener of education.

"This is not an example of inclusive education. The children involved are still being defined and segregated according to their parents' religion. And faith groups are still responsible for running their education.

"Bringing two faith schools together under one roof does not create a cohesive society. In many countries organised religion plays no special role in schooling. Scotland should follow their lead."

There are also concerns that segregated education has fostered sectarianism in Scotland. Last month the leader of Scotland's biggest teachers' union said non-Catholics were being deterred from applying to Catholic schools because teachers could be vetted according to their religious views.

This was despite the fact that the Scottish Social Attitudes Survey found that a record number of Scots – almost six in ten – had no religion.

Religious groups have a long history of involvement in Scottish education. In 1872 the state took responsibility for schools away from churches and some other private groups. But in return churches were granted a statutory role on education issues.

But there are signs that faith-based education may soon be rolled back in Scotland. Last month The Times reported that the Scottish government was planning to hand over councils' responsibilities to new bodies which will have no automatic religious seats on them. Mr McBay said church leaders had "held unearned power in Scotland's schools for too long" and added: "It is high time to put our children's interests ahead of those of established religion."