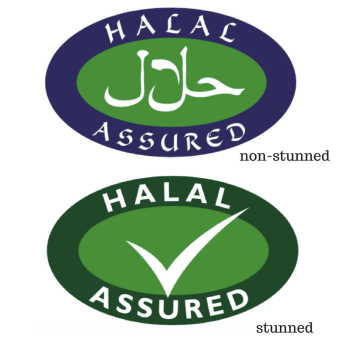 The National Secular Society has called for clearer labelling on meat slaughtered by religious methods.

The NSS was responding to a consultation launched by the Agriculture and Horticulture Development Board (AHDB) over its proposed new quality standards for halal sheepmeat. The board proposed two labels for halal meat: one to show it had been stunned before slaughter and one for 'traditionally slaughtered animals' (see right; words 'stunned' and 'non-stunned' added by NSS).

AHDB, which exists 'to enhance the profitability and sustainability of the English beef and lamb sector', said it was aiming to ensure its guidelines were 'fit for purpose'. Awal Fuseini, the board's halal sector manager, said it wanted to "add transparency to the supply chain" and "boost customer choice in the product they are buying".

The NSS expressed its support for these goals. But campaigns director Stephen Evans wrote that the proposed labels "are not clear enough to ensure customers have the information they need to make an informed choice".

"It is highly problematic that neither of the standard marks indicate whether pre-stunning has taken place," the response added. "The two standard marks are very similar and do not provide the information required by consumers who wish to avoid meat from animals killed without pre-stunning under the legal exemption."

The society added that the decision not to use the words 'stun' or 'without stunning' in the primary branding was "highly regrettable". The NSS particularly objected to the use of Arabic writing on the 'traditional' label, arguing that it is likely to confuse most British consumers.

It expressed concern that opposition to clear method of slaughter labelling is driven by a desire to subsidise the non-stun religious slaughter industry artificially. "A lack of clear, accurate labelling results in customers being deceived into purchasing meat killed under the exemption. A failure to provide clear, accurate labelling would result in the AHDB being complicit in this deceit", warned the NSS.

The NSS also argued that clearer labelling may help to alleviate public concern over halal meat. In 2013, a survey by the Food Standards Agency found that 84% of meat slaughtered by the halal method had been pre-stunned. "More accurate labelling would provide assurance and clarity where there is currently confusion" the response said.

The NSS has long argued for an end to religious exemptions to animal welfare laws. While exemptions exist, the society argues that meat produced from animals not stunned before slaughter should be clearly labelled to allow consumer choice.

Explaining the society's response, Mr Evans said: "As long as slaughter without pre-stunning is permitted, meat from animals killed under the exemption should be clearly labelled to allow consumers to avoid meat from non-stun slaughter if that is their choice.

"Unfortunately, this proposed labelling scheme lacks any real clarity and fails to provide the necessary information to enable consumers to make an informed choice.

"Ultimately we want to see an end to the religious exemption from legal requirements to stun animals before slaughter. But if religious groups are to be given privileged exemption from UK law, it seems reasonable to expect consumers to have the right to avoid meat from animals killed under that exemption.

"We urge the AHDB not to sacrifice transparency and clarity in an attempt to boost halal meat sales."