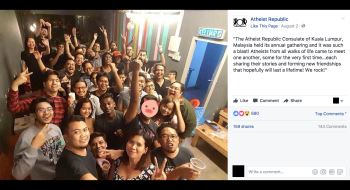 Malaysia's government says it will re-educate ex-Muslims who took part in an atheist meeting after a photo of the event went viral.

A minister has also said that anyone found spreading atheist ideas could be prosecuted.

Last week the Kuala Lumpur consulate of Atheist Republic, a global support group for atheists, held its annual conference. The group posted a photo of the gathering on Facebook and said it "was such a blast".

The image spread quickly, including on several Islamist blogs and sites. Malaysia's deputy minister who oversees religious affairs said the government would investigate the group to find out if any "Muslims" were involved in the meeting.

"If it is proven that there are Muslims involved in atheist activities that could affect their faith, the state Islamic religious departments could take action," said Dr Asyraf Wajdi Dusuki.

He said the government would take a "soft approach" to dealing with the issue. He said ex-Muslims who took part in the gathering would be given counselling. "Perhaps they are ignorant of the true Islam, so we need to engage them and educate them on the right teachings," he added.

Many social media users also called for the imprisonment or death of those involved in the meeting. "If they refuse to repent we burn them alive," wrote one. "An apostate's blood is halal for slaughter."

Another wrote: "The punishment for apostasy is death! What actions are our Mufti taking against this?"

Atheist activist and writer Ali Rizvi, who shared the threats, said: "This is the reality for those who leave Islam. We speak a lot here in the West about anti-Muslim bigotry, which is real and abhorrent. But it pales in comparison to Islamic bigotry, which gives license to its followers to murder those who dare to think for themselves, outside of Islam.

"Ex-Muslims, who still have Muslim names and share ethnicities and nationalities with other Muslims, are targeted by both."

Apostasy is not a federal crime in Malaysia, which has a Muslim majority but is multi-ethnic and multi-religious. But there is growing concern that Islamic fundamentalism is threatening religious freedoms. Malaysian states, which have their own laws governing Islamic affairs, do not allow Muslims to renounce Islam.

Former Muslims have been sent for counselling, fined and imprisoned. Many have been unable to register their new religious affiliations or legally marry non-Muslims.

The National Secular Society supports the rights of non-believers in Malaysia. Last month the NSS took part in the International Conference on Freedom of Conscience and Expression, which organisers said was the largest gathering of ex-Muslims in history.