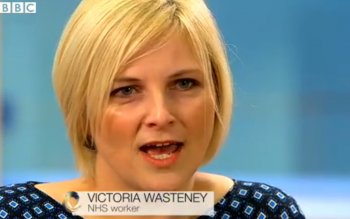 An NHS worker who was disciplined for using her position to evangelise will not be allowed to appeal against a decision that she did not face discrimination.

Christian Concern, an advocacy group for Christianity in the UK, has confirmed that Victoria Wasteney's request for permission to launch a second appeal has been rejected. It added that "the legal battle goes on" and called on followers to pray for her.

In June 2013 Wasteney, who worked as the Head of Forensic Occupational Therapy at the East London NHS Trust, was suspended from her position for nine months for gross misconduct. Enya Nawaz, a Muslim woman who worked for her, had accused her of harassment and bullying.

In 2015 she lost a tribunal case where she argued that the suspension was the result of religious discrimination. She lost her first appeal against the decision in 2016.

Her case was backed by the Christian Legal Centre, which provides legal support to Christians in the UK.

The tribunal found that Wasteney had misused her position to try to impose her religious views on a subordinate. Nawaz submitted an eight-page letter which outlined the pressure she was under.

She alleged that Wasteney had asked her to pray and given her a copy of I Dared to Call Him Father, a book about a Muslim woman who converted to Christianity. At one point Wasteney put her hand on Nawaz's knee in prayer and asked God to come to her. The incident allegedly lasted for 10 minutes, and Nawaz said she felt as if she was being groomed.

Other staff also raised concerns about Wasteney's behaviour, particularly after her church, the Christian Revival Church (CRC), began providing a worship service at the Trust.

She asked the users of the church to encourage other people to join the group "to find the love of God" as "homework". The tribunal noted that this was particularly troubling as "service users are vulnerable persons with mental health conditions".

A colleague said her interaction with a patient for whom she had no direct clinical responsibility had troubled nurses on the ward. Wasteney agreed to withdraw from accompanying the patient to church services, but was later seen on the ward asking about his escorting arrangements.

Others said church users were pressurised to dance, sing and clap at the services, and to donate to the CRC rather than to charity. They added that negative views were expressed about other religions at the services and they included the laying on of hands and speaking in tongues.

Wasteney's line manager had agreed to set up the services for a probationary period, on the condition that the services should have a broad appeal.

The tribunal found that "the way in which that worship was conducted gave rise to allegations of improper pressure on staff and service users". It said it was "unsurprised" both that Wasteney had faced disciplinary action and that the church services had been suspended.

Wasteney said she went to court because she believed there had been "some injustice". "This doesn't seem to be as it ought to be in a country where we are supposed to be able to be free with each other," she added.

The National Secular Society, which outlined many of the details of the case two years ago, said Wasteney's case was now "closed".

Stephen Evans, NSS campaigns director, said: "There is clearly a need for healthcare professionals to maintain proper professional boundaries at work. It will be clear to anyone who has read the facts of this case that Victoria Wasteney's behaviour was both unprofessional and unreasonable and that the disciplinary action taken against her by the NHS was justified.

"Again we see Christian lobby groups selectively presenting the evidence to portray Victoria Wasteney as a victim in order to further their false Christian persecution narrative. Unsurprisingly, it didn't stand up in court."