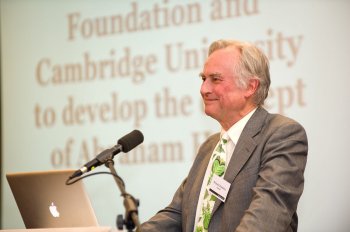 The National Secular Society has expressed its support for Richard Dawkins after a radio station cancelled one of his speeches because of his criticisms of Islam.

Professor Dawkins, an evolutionary biologist and honorary associate of the NSS, was due to address an event hosted by KPFA Radio in California next month. He was expected to discuss his new book Science in the Soul. But last week the station announced that it had cancelled the event because of his "abusive speech against Islam".

"We had booked this event based entirely on his excellent new book on science," KPFA wrote in an email to ticket holders. "We didn't know he had offended and hurt so many people.

"While KPFA emphatically supports serious free speech, we do not support abusive speech."

KPFA, which is funded by supporters, describes itself as a "progressive talk radio and music radio station". Reports suggested listeners had complained over previous statements which Dawkins had made, including a 2013 tweet which said "Islam is the greatest force for evil in the world today".

In a response on his foundation's website, Professor Dawkins called the station's justification for its decision "truly astonishing". He also denied using "abusive speech".

"I have called Islamism 'vile' but surely you understand that Islamism is not the same as Islam.

"I have criticised the ridiculous pseudoscientific claims made by Islamic apologists, and the opposition of Islamic 'scholars' to evolution and other scientific truths.

"I have strongly condemned the misogyny, homophobia, and violence of Islamism, of which Muslims — particularly Muslim women — are the prime victims. I have criticised the murdering of apostates for no crime other than their disbelief. I make no apologies for denouncing those oppressive cruelties, and I will continue to do so.

"I would seriously like to hear what examples of my 'abusive speech' you had in mind. When you fail to discover any, I presume you will issue a public apology."

KPFA then said in a tweet that it was exercising "its free speech right not to participate with anyone who uses hateful language against a community already under attack".

In a statement, the NSS said: "KPFA Radio has sided with religious fundamentalists who wish to hide from criticism. It has justified its decision by making a false distinction between 'serious free speech' and 'abusive speech'.

"The station has provided no evidence of 'hateful speech' against Muslims. Professor Dawkins has consistently made his opposition to anti-Muslim bigotry and discrimination very clear.

"Healthy societies require free and open debate, including – and arguably particularly – when those discussions offend religious sensitivities. Decisions such as these have a chilling effect on free speech by discouraging people from speaking out about some of the most important issues of our time."