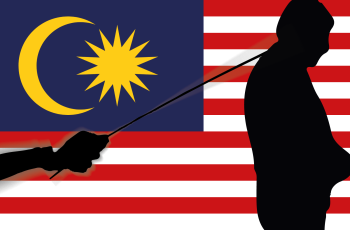 Legislators in Malaysia's northeastern state of Kelantan have voted to allow the public caning of those who break strict Islamic laws.

On Wednesday the state's legislature approved amendments to its sharia code which will allow the punishment to take place.

If the changes are confirmed, "illicit" sexual acts, homosexuality and alcohol consumption will be punishable by public caning. Religious enforcement officers will be allowed to handcuff suspects and use videos as evidence in court.

The amendments require the consent of the Kelantan sultan before being implemented. Malaysia's deputy prime minister, Ahmad Zahid Hamidi, said they would "only" affect Muslims in the state.

Malaysia operates a dual-track legal system. Islamic courts handle issues concerning religion and the family. Criminal cases are dealt with under federal law, where caning in prison is a potential punishment.

In Kelantan the Pan-Malaysian Islamic Party (PAS), an orthodox Muslim party which governs the state, has been trying to toughen the punishments which can be given out under sharia. On Wednesday the state's deputy chief minister Mohd Amar Nik Abdullah said the changes were "in accordance with religious requirements".

PAS, which is traditionally influential in rural parts of Malaysia, has been in power in Kelantan for over 20 years. In 2015 it led efforts to mandate punishments for breaching religious laws, including amputations for theft and stoning to death for adultery.

The state legislature passed a law but it has not been implemented because Malaysia's federal constitution forbids it. Critics said this week's amendments were also against the constitution.

In recent years intolerant attitudes have gained ground in Malaysia. The prime minister, Najib Razak, has promised to pass legislation championed by PAS which would "empower" sharia courts. In May the country's top secular court rejected a woman's appeal to have her conversion from Islam to Christianity legally recognised.

The National Secular Society does not recognise the legitimacy of sharia 'law', as it fundamentally undermines the rule of law. The NSS is a founder member of the One Law for All campaign.