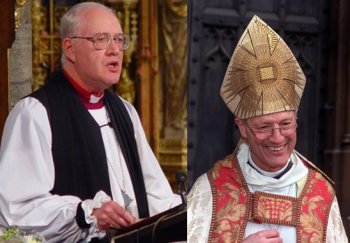 The head of the Church of England, Justin Welby, has admitted that the Church "concealed" evidence of child abuse by a former bishop and failed to help his victims.

The admissions comes following the publication of independent review into the way the Church of England responded to the case of Peter Ball, the former Bishop of Gloucester, who was jailed in 2015 after admitting a string of historical sex offences against 18 teenagers and young men. Ball was released from jail in February after serving 16 months.

In the foreword to her report, Dame Moira Gibb said the serious sexual wrongdoing of Ball "is shocking in itself but is compounded by the failure of the church to respond appropriately to his misconduct, again over a period of many years".

The Report says the Church's attitude to homosexuality part in the failure to act appropriately.

Responding to the Report, Archbishop Welby said: "Abuse of Faith makes harrowing reading: the Church colluded and concealed rather than seeking to help those who were brave enough to come forward".

The report makes 11 recommendations, including improving support to survivors of clerical abuse and taking steps to "demonstrate the individual and collective accountability of bishops".

Peter Hancock, the C of E's lead safeguarding bishop, said he was "appalled and disturbed" by the report's contents. He said there were "no excuses" and confirmed that the Church would accept all of Dame Moira Gibb' recommendations.

The report is highly critical of the former Archbishop of Canterbury Lord Carey, who has subsequently been asked to step down from his position as an honorary assistant bishop by Justin Welby.

According to the Report, Lord Carey "set the tone for the Church's response to Ball's crimes and gave the steer which allowed Ball's assertions that he was innocent to gain credence".

The Report states that Lord Carey "was already aware that the Church had received letters raising concern about Ball's abuse of other young men", yet he intervened with the Police and CPS to dissuade them from charging Ball.

The National Secular Society said this raised "serious concerns about misconduct in public office" which it has called to be investigated.

In a statement, Lord Carey said the report made "deeply uncomfortable reading" and apologised to the victims of Peter Ball.

Another former Archbishop of Canterbury, Lord Rowan Williams, is criticised for making "lamentably slow" progress, despite setting the wheels in motion that ultimately led to the criminal case against Peter Ball being reopened.

The National Secular Society, which submitted evidence to the Review, said the findings were a "damning indictment" on the established Church.

NSS executive director, Keith Porteous Wood, said: "The culture of bishops with selective amnesia closing ranks and the bullying of victims and whistle-blowers played a significant role in a suicide and in Ball escaping justice for decades. That culture persists to this day. We asked Dame Moira specifically to investigate these aspects but there is no reference to them in her report. Until these fatal institutional flaws are recognised and excised no amount of child protection procedures will be effective.

"The Report could not credibly have let Lord Carey off the hook, but it has still been very gentle on him given it states he had known of complaints of Ball's conduct which it seems inexplicable he could not have believed. We hope that this aspect is formally re-examined.

"There seems little doubt that only because it was the established Church were Lord Carey and other senior churchmen able to exert such influence over the administration of justice in a way that has belatedly been admitted to have been so disastrous. Indeed, because it is the established Church, its bishops are classified as public officers and the law rightly requires of them a minimum standard of conduct.

"It seems to us that it will be difficult for them to argue in court – even using material in this report - that misconduct in public office has not taken place. We hope that the question of whether such misconduct has taken place will be robustly investigated."

The report also highlights the role of other arms of "the establishment", most notably Gloucestershire Police, which in its submission to the CPS said that charging Ball would "have a devastating effect on the Church which is already in turmoil".

Richard Scorer, a specialist abuse lawyer at Slater and Gordon, told The Times: "Given what's in the report, there is now a clear case for the police and CPS to consider criminal charges against senior [Church of England] figures, including Lord Carey, for offences of misconduct in public office and perverting the course of justice."