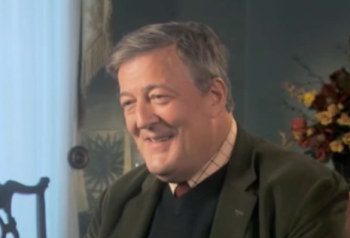 The National Secular Society has called for the repeal of Ireland's blasphemy law after Irish police dropped an investigation against Stephen Fry over a complaint of 'blasphemy' related to an interview aired in 2015.

In the interview Fry was asked what he would say to God, and he replied, "How dare you create a world in which there is such misery? It's not our fault? It's not right. It's utterly, utterly evil."

He added: "Why should I respect a capricious, mean-minded, stupid god who creates a world which is so full of injustice and pain?"

A single member of the public complained to the police back in 2015.

It appears that no action was initially taken but then, a few weeks ago, the complainant was contacted by a detective who said they were investigating the case. The complainant says he was asked if he would be willing to make a "new more detailed statement".

The Gardaí have since decided not to proceed with a blasphemy charge as they were reportedly unable to find a substantial number of outraged people.

Under Ireland's Defamation Act 2009, it is illegal to publish or utter a matter that is "grossly abusive or insulting in relation to matters sacred by any religion, thereby intentionally causing outrage among a substantial number of adherents of that religion". It is punishable by a fine of up to €25,000.

The National Secular Society welcomed the decision not to prosecute Stephen Fry, but warned that the reason given by the police would only "incentivise outrage".

Campaigns director Stephen Evans said, "Atheists, Christians, ex-Muslims and a whole range of minorities face persecution throughout the Muslim world, where blasphemy laws are used to silence dissent and drive religious minorities out of office. In places like Pakistan the mere accusation of blasphemy can incite lynch mobs.

"How can Ireland, or any other country with a blasphemy law, speak out with any credibility against these appalling human rights abuses?

"Having an archaic law that is not enforced is bad enough, but the investigation of Stephen Fry indicates that the police are prepared to actively enforce the law, and this is a deeply troubling sign. This episode has tarnished Ireland's global reputation, and the time has surely now come to abolish Ireland's blasphemy laws."

The campaign group Atheist Ireland has called on the Irish Government to "honour its commitment to hold a referendum to remove the ban on blasphemy from [the Irish] Constitution."

This was echoed by Ireland's Health Minister Simon Harris, who said the blasphemy law was "silly" and "embarrassing" and should be removed through a constitutional referendum.

Blasphemy laws were abolished in England and Wales in 2008, following a long campaign by the National Secular Society.