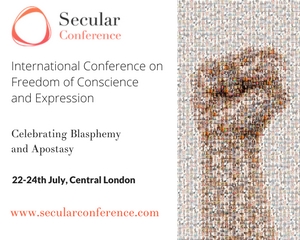 Dozens of speakers are confirmed to address the upcoming 'Free Expression & Conscience' conference, including many honorary associates of the National Secular Society.

The international conference is being organised by activist Maryam Namazie, who was named Secularist of the Year in 2005. The NSS is one of the organisations sponsoring the conference and NSS council member and free speech activist Chris Moos will speak at the event.

The conference will "discuss censorship and blasphemy laws, freedom of and from religion, apostasy, the limits of religion's role in society, LGBT and women's rights, atheism, secular values and more."

Organisers said the event will "highlight the voices of people on the frontlines of resistance - many of them persecuted and exiled – as well as address challenges faced by activists and freethinkers, elaborate on the links between democratic politics and free expression and conscience, promote secular and rights-based alternatives, and establish priorities for collective action."

Yasmin Rehman, who was named Secularist of the Year 2017 by the Society in March, will speak. She will be joined by several of the National Secular Society's honorary associates including Richard Dawkins and AC Grayling.

Many other speakers from all over the world are attending.

The conference will take place over two days, on the 22nd and 23rd July. Tickets must be purchased online.

Panel topics on the first day will include discussions on:

- 'Religion in the law and state'

- 'Secularism as a human right'

The second day will have panels on:

Following the conference, on 24th July, there will be a strategy meeting for ex-Muslims which will be open to the public.