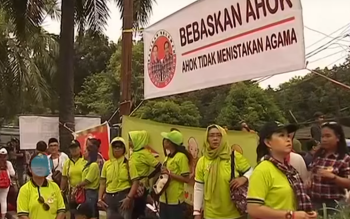 Indonesia, Denmark and New Zealand are facing calls to repeal their blasphemy laws, following the conviction of Jakarta's former governor for blasphemy and an investigation into Stephen Fry.

Former Governor Ahok was sentenced to two years in jail, a much more severe sentence than was expected, after he quoted from the Koran and was accused of insulting it. There have been angry protests against him throughout the trial. Police estimated that 15,000 attended a protest against him in March, but the true figure could be much higher.

Following his conviction and sentencing there have been complaints from Islamists that it was too lenient.

Amnesty International said the verdict "demonstrates the inherent injustice of Indonesia's blasphemy law, which should be repealed immediately.

"Despite protests of his innocence and evidence that his words were manipulated for political purposes, he has been sentenced to two years in jail. The verdict will tarnish Indonesia's reputation as a tolerant nation."

Ahok has said that he will appeal against the sentence.

"This week Ireland has dropped a criminal investigation into Stephen Fry for blasphemy, but Ahok had no such luck. If his appeal is unsuccessful he will spend the next two years in prison. How can Ireland speak out against this appalling human rights violation while it has similar legislation?"

Following the news of the investigation, media in New Zealand reported that public figures there were "surprised" to learn that the country still had a blasphemy law, although it has not been used in almost a century.

Both Prime Minister Bill English and Anglican Archbishop Philip Richardson have called for the law to be repealed. The Prime Minister said he believed the law had only ever been used once, and said blasphemy laws were "not a good idea."

He said that New Zealanders would be "taken aback" if their authorities made the same choice as Gardaí in Ireland did to actually investigate a case.

And campaigners in Denmark are circulating a petition to secularist and human rights organisations around the world to drum up international support for their campaign against Danish blasphemy laws.

Danish law punishes "Any person who, in public, ridicules or insults the dogmas or worship of any lawfully existing religious community" with a fine or even a prison sentence of four months.

The petition says that "Denmark's blasphemy ban is manifestly inconsistent with Denmark's tradition for frank and open debate, and puts Denmark in the same category as many illiberal states where blasphemy laws are being used to silence dissent and persecute minorities."

It draws attention to the case of a man prosecuted earlier this year for burning a Koran, the first prosecution under the law since 1971.

The National Secular Society, which played a crucial role in abolishing blasphemy legislation in England and Wales, is a signatory to the petition.