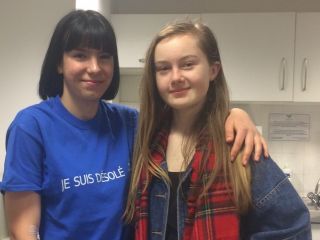 Two Welsh school students have launched a petition calling on Welsh Assembly Members to end the obligation on schools to hold collective worship.

Rhiannon Shipton, one of the two petitioners, said: "As students we strongly believe it is an unnecessary ritual to be forced to say the Lord's Prayer during each assembly. If anything it is a waste of time for those that are of another religion or are atheist.

"This is not an attack on any religion. People are free to have their beliefs, but it's wrong to force students to take part in prayers when they don't believe in the God that's being worshipped."

The 15-year-olds, who attend the Ysgol Gyfun Gymraeg Glantaf Welsh-language school, met with the clerk to the Welsh Assembly's Petitions Committee to launch their appeal.

The petition reads: "We call on the National Assembly for Wales to urge the Welsh Government to pass a law that removes the obligation on schools to hold acts of religious worship."

Assemblies with an act of worship take place at the school every day, in line with English and Welsh law. The law only permits sixth form pupils over the age of sixteen to withdrawal themselves from acts of worship in schools.

Martin Shipton, Rhiannon's father, said both she and fellow petitioner Lily McAllister-Sutton were "becoming increasingly frustrated by being forced to say prayers against their will."

Mr Shipton added that while parents can withdraw their children from assemblies, "that would set them apart from other pupils and remove them from an important communal event in the school's day."

Instead of collective worship, Lily and Rhiannon have suggested a time for reflection.

In 2016 the National Secular Society urged the Cabinet Secretary for Education in Wales, Kirsty Williams, to lead the way on child rights by repealing outdated provisions regarding collective worship.

Ms Williams suggested a review of collective worship in Wales could be undertaken once the ongoing curriculum reform has been completed.

Stephen Evans, the campaigns director of the National Secular Society, commended the pupils' work and said the current settlement was "unfair and wrong."

"Nobody should be forced to attend prayers of any religion against their will. Withdrawing pupils from collective worship is rarely a practical option, and is obviously divisive. The time really has come to abolish the hopelessly anachronistic requirement of schools to provide 'broadly Christian' worship and we urge the Welsh Government to take the lead on this issue.

"A truly progressive new curriculum for Wales should include a duty on all schools to ensure that all aspects of its curriculum, including assemblies, are respectful and inclusive of all pupils."

The National Secular Society recently launched a manifesto on rethinking the role of religion and belief in public life, which called for the abolition of the current legal requirement on English and Welsh schools to hold collective worship.

The manifesto said that "Where schools do hold acts of worship pupils should themselves be free to choose not to take part."

This chimes with recommendations of the UN children's rights committee which has called on the UK to abolish compulsory worship in schools and ensure pupils are given the independent right of withdrawal.