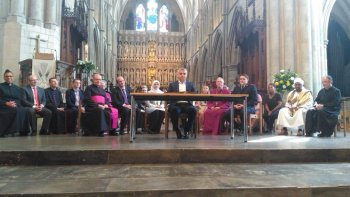 Sadiq Khan has hit out at the Government's plans to allow total religiously-selective admissions in new free schools with a faith ethos.

Proposals to remove the current 50% limit on religiously selective admissions "could represent a threat to the drive to pursue greater integration in our schools," wrote Matthew Ryder QC, the Deputy Mayor with responsibility for integration.

Mr Ryder said "the Mayor and I share the view that it is imperative that every effort is made to encourage people of difference backgrounds to mix as much as possible, and this is as true in our schools as it is in workplaces and communities."

The Deputy Mayor said that faith schools in London, as in the rest of the country, "have lower proportions of pupils on Free School Meals than other schools" and he cited work by integration expert Professor Ted Cantle which raised concerns that "religiously-selective schools are less accessible to children from poorer backgrounds."

This picture "must therefore be of concern to those of us who believe we should be striving to create more avenues for social integration, not fewer," Ryder said.

He was writing in response to Tony Armour AM, chairman of the London Assembly, regarding a motion passed by the Assembly in November expressing its concern about the Government's proposal.

He also noted the significant Casey Review on integration, released last year, which had recommended work "to promote more integrated schools and opportunities for pupils to mix with others from different backgrounds."

The Government would make this task harder, the Deputy Mayor said, and the proposal to lose the admissions cap "will run the risk of making it less likely that religious free schools will achieve greater integration and diversity among their intake."

Even if the cap has failed to achieve greater integration in faith schools, the right response "is not to remove the cap", particularly without a concrete new measure to replace it. At best this would preserve the status quo, "and in all likelihood make things worse."

Maintaining the cap, on the other hand, "would at least underline the message" that faith schools must retain an "open approach to others."

"This is the message that we should be sending to our schools and I am happy to consider with colleagues ways in which we might be able to achieve this."

The National Secular Society has been vigorously campaigning against the Government's plans to expand religious selection in faith-based free schools. In response to a Department for Education consultation last December, the NSS urged the Government to abandon the proposal to drop the 50% cap and criticised alternative measures to promote integration as "ineffective and tokenistic".