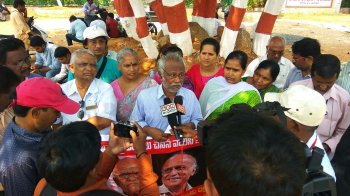 Many Pakistanis and other Muslims from around the world called for the execution of a secular writer for blasphemy over the weekend, causing #HangAyazNizami to trend on Twitter.

Ayaz Nizami, a penname, was arrested and charged with blasphemy in a 'counter-terrorism' court. Two other bloggers were accused of blasphemy along with Nizami.

Maajid Nawaz said those tweeting #HangAyazNizami were "insecure, petty, weak little cowards" and he urged Twitter to note the clamour for Nizami's murder across its platform.

Maryam Namazie asked if the company was aware "there is a hashtag calling for the death of a freethinker in prison in Pakistan?"

Julie Lenarz, Director of the Human Security Centre, tweeted, "75% of Pakistanis say blasphemy laws are necessary to protect Islam, according to Pew poll. And you wonder why #HangAyazNizami is trending?"

That figure was found by the Pew Research Centre in 2013.

Following the attack on Charlie Hebdo a poll of UK Muslims found that 11% agreed with the statement "organisations which publish images of the Prophet Mohammed deserve to be attacked".

A poll in 2016 found that 78% of British Muslims think there is no right to publish images of Mohammed.

The calls for the execution of Nizami came as atheists and secularists across the Islamic world faced more intense persecution in Muslim-majority countries, both state-sponsored and from vigilantes.

A 19-year-old Iranian, Sina Dehghan, has been sentenced to death after being tricking into signing a confession that he insulted 'the prophet'.

According to a source quoted by the Centre for Human Rights in Iran Dehghan was told during interrogation that "if he signed a confession and repented, he would be pardoned and let go."

"Unfortunately, he made a childish decision and accepted the charges. Then they sentenced him to death," the source added.

The 19-year-old is reportedly being held "with drug convicts and murderers who broke his jaw a while ago."

On 16 March a man was murdered in the Indian city of Coimbatore for being an atheist.

H Farook was hacked to death by a small group of Muslims who were angered by atheistic posts in a WhatsApp group he administered. One image in the WhatsApp thread showed one of Farook's children holding a sign which said there was no god.

Following the killing Farook's father vowed to continue his son's work. "If they killed him for being an atheist, I have decided to join his organisation and do what he did," R Hameed said.

More than 100 activists attended a demonstration organised by the Atheist Society of India. Jaya Gopal, of the International Committee to Protect Freethinkers (pictured) said the killing was "an act of savagery and intolerance".

Speaking at the European Parliament Platform for Secularism in Politics last week, Ján Figeľ, the EU's first Special Envoy for the promotion of freedom of religion or belief outside the European Union, said blasphemy laws should be "eliminated".