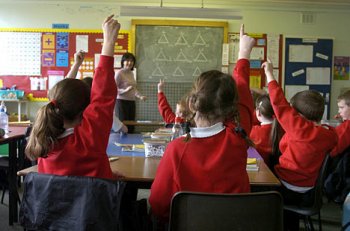 A study by academics at Leeds Beckett University and the University of Missouri has found a strong "negative correlation" between time spent on religion in schools, and maths and science achievement.

The paper, published in Intelligence, demonstrates that more religious countries have lower educational performance in mathematics and science than less religious nations.

Researchers ranked 76 countries, including the UK, by their religiosity, using questionnaires carried out for the World Values Survey and the European Social Survey.

They found that time spent on religion in school has a negative correlation with educational performance in mathematics and science.

The academics suggested that an excess of religion in some country's curricula could lead to a "displacement of non-religious activities".

Professor Gijsbert Stoet of Leeds Beckett University, who led the research, said: "The findings support the idea of a 'displacement hypothesis' that when children spent more of their time on religion, they will spend less time on other things."

The study's authors suggested that this should be considered in the context of the UK government's plans for more faith-based free schools.

"Science and mathematics education [is] key for modern societies. Our research suggests that education might benefit from a stronger secular approach. In that context, the current UK policy of investing more money in faith-based [schools] should be reconsidered," Professor Stoet said.

He added that while it is "already known that faith schooling leads to segregation of communities", their research made clear that "religiosity is actually directly associated with lower performance."

Professor Stoet called for more research to be done into the impact of religiosity on education.

Read the paper, 'Students in countries with higher levels of religiosity perform lower in science and mathematics,' here.