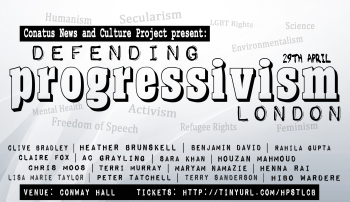 A conference around the theme of 'defending progressivism' is to be held in London on April 29.

The conference, organised by Conatus News and the Kurdish Culture Project, will cover many topics including secularism, freedom of expression, and LGTB rights

The National Secular Society is sponsoring the conference, at which attendees will hear from a number of the Society's representatives and honorary associates.

NSS President Terry Sanderson will speak on the challenges to the secularist movement today and the need to defend secular values.

The organisers have already confirmed the attendance of many guest speakers including Professor AC Grayling, Sara Khan, Peter Tatchell and Maryam Namazie.

The conference will also hear from NSS council member Chris Moos, who the NSS supported in 2013 during the LSE freshers' fair 'Jesus and Mo' controversy.

Conatus News, billed as "the voice of progressivism", was founded by Benjamin David. He said:

"'Defending Progressivism' is an unprecedented conference in London bringing together the greatest minds in decisive areas within the social-progressive movement.

"With a focus on secularism, LGBT rights, humanism, feminism, mental health, environmentalism (and other subjects), 'Defending Progressivism' aims to effectuate a new, unified progressive consciousness underpinned by a shared goal in human-rights, reason and compassion."

The Kurdish Culture Project, which is jointly organised the event with Conatus News, works to raise the profile of enlightenment ideas.

Tickets can be purchased here for £5.