Trump to shred key separation between religion and politics 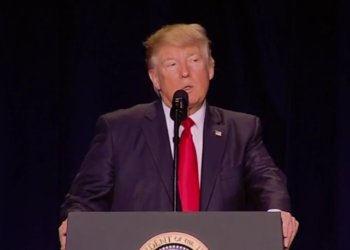 President Trump has promised to fulfil a campaign pledge to abolish the Johnson Amendment, which prevents tax-exempt organisations, including churches, from partisan political activity.

Speaking at the National Prayer Breakfast he said he would "get rid of and totally destroy" the amendment – introduced in 1954 and signed by Republican President Dwight D. Eisenhower.

Trump said he wanted to "allow our representatives of faith to speak freely and without fear of retribution—I will do that."

"Freedom of religion is a sacred right, but it's also a right under threat all around us and the world is under serious, serious threat in so many different ways.

"I've never seen it so much and so openly. We're going to straighten it out. That's what I do, I fix things. It's time we're going to be a little bit tough."

During his acceptance speech for the Republican nomination he claimed the law stopped evangelical Christian leaders "speaking your minds from your own pulpits".

Trump promised to "work hard to repeal" the amendment "to protect free speech for all Americans.

However the amendment only prevents tax exempt organisations from engaging in partisan activity such as endorsing or campaigning for specific candidates.

The New York Times explained that "ministers are restricted from endorsing or opposing candidates from the pulpit" and "If they do, they risk losing their tax-exempt status."

The Rev. Barry W. Lynn, executive director of Americans United for Separation of Church and State, has previously blasted the proposal as "short-sighted, reckless and corrosive to religious life."

Americans United's Project Fair Play seeks to educate Americans about the law banning partisan activity by houses of worship and religious non-profits and urges religious leaders to comply with these provisions.

Meanwhile a document reported to be a leaked draft of an executive order on "religious freedom" sets out how the Trump White House could enshrine specific religious beliefs—reflecting conservative Christian social tenets— in executive policy, expanding the ability of religious groups to discriminate against LGBT people.