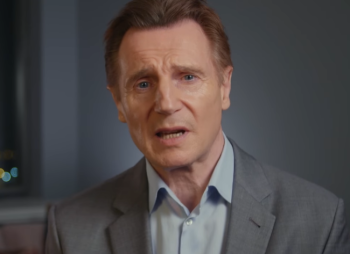 The appeal was launched for the 'Integrate My School' campaign, which offers support for parents and schools on how to begin the transformation process.

The campaign says that transforming a school means that it "will welcome children from Protestant and Catholic backgrounds, as well as those of other faiths and none. For many, the transition to integrated status is a natural step, as the school may well already attract children from different religious and cultural backgrounds."

A majority of parents "already support the idea of integrated education", the campaign notes.

"The process of becoming an integrated school is called transformation, and by signing a petition to register your support, you have the power to trigger this process within your school."

In his video appeal Neeson asked: "As Northern Ireland moves forward from division, who do we look to for a future we can share?

"So why continue to educate them apart. Different religions, different backgrounds, different schools. There is another way. Protestants and Catholics, other beliefs and none, learning and working together every day.

"Most people agree that educating children together is a better way forward for our society. It's time to turn our aspiration into reality."

He appealed to parents to "help being the process of integrating your school".

The BBC reported that just 7% of Northern Ireland's school pupils are educated in integrated schools.

In January the National Secular Society welcomed proposals from Kellie Armstrong MLA aimed at simplifying the transformation process and boosting the number of integrated schools.

Campaigns director Stephen Evans said, "I hope this issue is near the top of the political agenda following the election in March. Theresa May should take note of the clamour to integrate schools in Northern Ireland, as she continues to push more religiously selective faith schools in England."