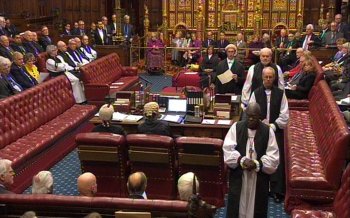 The National Secular Society has recommended the removal of the Bishops' Bench to a parliamentary inquiry into how to reduce the size of the bloated House of Lords.

In a written submission to the Lord Speaker's committee on the size of the House of Lords, Stephen Evans, the campaigns director of the National Secular Society, said: "There is no reasonable justification for allowing Church of England bishops to act as ex-officio legislators. The Bench of Bishops is an anomaly in a modern, liberal democracy and if a need to reduce the size of the chamber has been identified the Bishops' Bench is an obvious place to start."

To cut the number of peers to a more manageable size the NSS urged the committee to "consider entirely removing the Bishops' Bench and ending the arrangement whereby religious representatives are given seats as of right."

Not only would this make the upper house less crowded, but it would make a "more equitable and democratic chamber", the Society said.

The Society said that it was wrong for any religion to have a privileged position in the upper chamber, and that it was long since time for the anachronism of the Bishops' Bench to be removed.

Currently two archbishops and 24 bishops are given seats in the upper house and are able to vote on legislation.

Their position grants them other privileges, and they are given deferential treatment by other members. Other peers defer to a bishop wishing to intervene, and they are able to speak unconstrained by party quotes – both points the NSS raised with the Lord Speaker's committee.

The current settlement is "both divisive and unrepresentative", and on some issues the bishops do not even represent the views of their own laity, the Society said, citing marriage equality as an example.

The Archbishop of Canterbury Justin Welby has called the current Bench of Bishops the most "orthodox" since WWII.

It was "indefensible" to maintain the status quo, the Society's submission said, and polling from 2012 and 2010 found a majority of the public, including 70% of Christians, believe it is wrong for the bishops to be given seats automatically.

In its submission the Society again stressed its opposition to replacing or supplementing bishops with leaders from other faiths.

"Any proposals to extend religious representation in the Lords to other religions, such as made by the Woolf Commission in 2016, must be resisted. Such a move would be both unworkable and unpopular and run the risk of creating sectarian tensions.

The Electoral Reform Society has also criticised the current role of the Church of England in the House of Lords. They said that "The place of the Lords Spiritual is anachronistic.

"Iran is the only other legislature in the world which gives unelected clerics automatic representation in its legislature."

The ERS also rejected suggestions of adding more religious representatives from different faiths to represent minorities: "The automatic inclusion of representatives of other faiths is an unacceptable solution due to the difficulty of deciding which faiths and denominations within faiths to include, how to include non-religious organisations, and the constantly changing demographics of the UK."

The Lord Speaker's committee is charged with exploring "methods by which the size of the House of Lords can be reduced, commensurate with its current role and functions."

The House of Lords currently has over 850 members, making it the second-largest legislative body in the world.