43% of universities restrict speech that might “offend” religious people 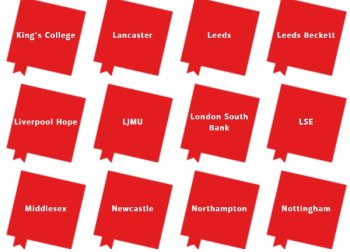 University administrations are becoming increasingly "censorious", with 43% of universities censoring speech that might "offend" religious people, according to online magazine Spiked.

Launching its third annual analysis of campus censorship, Spiked said: "The fight for the freedom to criticise religion, to blaspheme, was at the very heart of the historic fight for free speech. Yet it seems some universities, terrified of offending students of faith, are turning the clock back."

It highlighted London South Bank University's Code of Practice for Freedom of Speech, which warns students that one definition of an 'unlawful meeting' is one "at which there is a likelihood that the speaker(s) may… commit blasphemy". In 2014 the University removed posters from their student atheist society for being "religiously offensive". Following criticism the University removed the policy with a version that did not mention blasphemy, the document was hosted at the same address and gave no indication of when it was issued.

Warwick University's Student Union Policy is also criticised for stating that speakers 'must seek to avoid insulting other faiths or groups'. In 2015 the University's student union barred Iranian-born secularist and human rights activist Maryam Namazie from speaking, claiming she was "highly inflammatory and could incite hatred" if allowed to take up secularist society invitation.

The report does not include restrictions on illegal speech such as incitement to violence or to racial or religious hatred, but does include policies aimed at stopping "offensive" speech. Many examples in the rankings were repeated due to universities adopting similar model policies, for example dozens of policies use the ill-defined language of avoiding "needlessly offensive" language.

The FSUR looks at the policies and actions of universities and students' unions ranking them using a traffic light system. The report is sponsored by the Joseph Rowntree Reform Trust and Academics For Academic Freedom.

Speaking to the Independent, free speech campaigner and NSS honorary associate Peter Tatchell said "Universities used to be bastions of free speech and open debate. As this report shows, they are increasingly hedging free speech with all kinds of qualifications, making it no longer free."

While defending Universities rights to ban "Islamist and far right speakers who endorse violence against women and minorities", Mr Tatchell said that free speech restrictions were being used to target legitimate groups due to "religious pressure".

However, Malia Bouattia, President of the National Union of Students, criticised the findings as "flawed" and "absurd".

She said: "No Platform and Safe Space policies create an environment where students and staff are free from harassment and fear" and pointed to some of the ranking's criteria including legitimate anti-discrimination and anti-harassment policies.

National Secular Society campaigns director Stephen Evans said: "While flawed in places, the report provides useful tool for taking the temperature of free speech on university campuses. Although often well meaning, it's clear that censorious policies intended to 'avoid insulting other faiths or groups', are open to misuse, particularly by those who feel religious ideas should be shielded from criticism.

"The right to freedom of expression is crucial in a democracy and we hope this report sparks a positive debate on how universities can best meet their legal obligation to promote and facilitate academic freedom and freedom of speech."

You can read the full results of the Free Speech University Rankings 2017 here.