The need for a secular state “has never been greater”, says new report 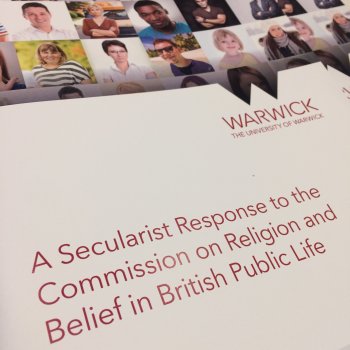 A secularist report produced by academics and campaigners has urged the Government to reject calls for more religious privilege.

In late 2015 the Woolf Institute's Commission on Religion and Belief (CORAB) in Public Life published a report which made sweeping recommendations on the role of religion in Britain, with proposals that would have given minority faiths similar privileges to those enjoyed by the Church of England, including seats in the House of Lords.

Just one of CORAB's twenty-one commissioners was from a non-religious organisation and many groups, including the National Secular Society, declined to submit evidence to the Commission over concerns about its unrepresentative membership.

Academics, secularists and campaigners have now produced "A Secularist Response" to the Commission's findings, drawn up by Dr Steven Kettell at the University of Warwick, and based on the deliberations of an expert panel which met last year.

Dr Kettell wrote that the flaws in the CORAB report "are evident from the outset."

"Despite acknowledging the decline of religion, along with the rise of non-religion and the growing diversity of religion and belief in Britain, CORAB sought to promote an enhanced and more prominent role for faith in British public life."

"With a growing proportion of Britons now identifying as non-religious, and with levels of cultural pluralism and diversity on the rise, the need for a political and legal system capable of giving equal weight and recognition to all citizens has never been greater," Dr Kettell wrote.

CORAB's 37 recommendations were "at odds with the realities of modern British society," the response says, and a new path is needed to recognise growing pluralism, diversity and secularisation.

Instead of the multi-faith approach taken by CORAB, the secularist response advocates "a secular state, impartial to all systems of religion" to guarantee "equality for all citizens" and as "the best mean of fostering a free, inclusive and democratic society".

No religious group should be given "an automatic right to representation in Parliament," the response says, in contrast with the Woolf Commission's call for imams and rabbis to join Anglican bishops.

Dr Kettell's response echoes recent proposals made by the National Secular Society in its new report, 'Rethinking religion and belief in public life: a manifesto for change', which also rebutted recommendations made by the Woolf Commission.

Where the Woolf Commission did make nods towards secular reforms, in line with Britain's largely irreligious population, they were typically limited in scope and practicality. On faith schools, the Commission simply said that leaders should "take measures to reduce selection of pupils and staff on grounds of religion".

Both Dr Kettell's response and the NSS' manifesto call for an end to faith schools.

The new secularist response also said that current levels of support for faith schools looked "set to unwind as the secularisation of British society increases and as the intake of faith schools themselves becomes increasingly secular", a situation which is "likely to become increasingly untenable."

Speaking at the Report's launch at London's Shard, National Secular Society executive director, Keith Porteous Wood, said: "The need to implement the noble secularist principle of equality for all irrespective of religion or belief becomes all the more pressing as society becomes less religious and more diverse. But too many institutions seem hell-bent on obstructing that equality."

You can read the full report here.