Suffragettes would “turn in their graves” at the suffering of women under sharia, says peer 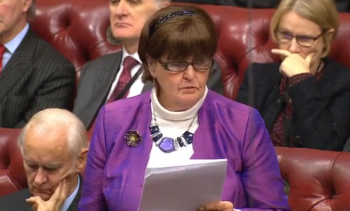 Baroness Cox has launched a fresh attempt to tackle sharia councils operating in the UK and protect women's rights.

Speaking at the second reading of her Arbitration and Mediation Services (Equality) Bill, Baroness Cox said that "We must not condone situations where rulings are applied which are fundamentally incompatible with the laws, values, principles and policies of our country."

Baroness Cox said that "Muslim women are today suffering in ways in which would make suffragettes turn in their graves" and that the proposals in her legislation, supported by the National Secular Society, were a "lifeline". She thanked the NSS for its support and said the problems were "escalating".

She said the legislation "seeks to address two interrelated issues: the suffering of women oppressed by religiously sanctioned gender discrimination, and a rapidly developing alternative quasi-legal system which undermines the fundamental principle of one law for all."

It was clear that some sharia tribunals operating in the UK were "practising gender discrimination" and she cited several examples of Muslim women who faced immense social pressure to use discriminatory sharia 'courts' and faced immense hardship because they did not have the legal protections of a real marriage recognised by the state.

There were 100,000 "couples in Britain today who are living in Islamic marriages not recognised by English law", Cox said, with women being "duped" into believing these ceremonies were legally valid, only "to find upon divorce they have few to no rights in terms of finance or property."

The position of many Muslim women in "closed communities" led to "enormous pressure" not to seek outside help, Baroness Cox explained, because that is seen as bringing "shame" on the family.

She criticised police and authorities for their reluctance to "take action that might be deemed to give offence" to "leaders of these communities".

Peers from all sides of the House offered their support for the legislation.

Lord Anderson, a Labour peer, warned of the danger of a "parallel jurisdiction developing in this country".

Baroness Falkner, a Liberal Democrat, said the legislation was not an "anti-Muslim bill" but that it might restrict the power of Muslim men over women.

However, Lord Keen, speaking for the Government, said that he "cannot give guarantees of government legislation" on protecting women from discriminatory sharia arbitration and said it was "beyond my pay grade." He said that the Government was still considering the recent Casey report into segregation and the findings of the Home Office's review into sharia law, launched when Theresa May was still Home Secretary.

Baroness Cox said that the Government was "living on a different planet" and that without Government support there will be a delay "during which countless women will continue to suffer".

The bill will now proceed to be committed to a Committee of the Whole House.