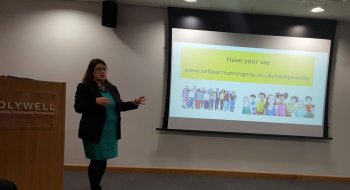 The National Secular Society has called for more efforts to integrate education, promote citizenship education and reduce discrimination against pupils and teachers in Northern Ireland.

The Society welcomed proposals by Alliance MLA by Kellie Armstrong to boost integrated education, which brings children, staff and families from different religious and non-religious backgrounds together into the same schools.

Currently, the "extent to which state education is religiously segregated in Northern Ireland is unique both in the UK and among developed nations", the NSS said.

Armstrong proposed the bill to provide for the "increasing number of parents and children want to attend an integrated school", noting that "integrated education is still seen as an integral part of healing a divided society."

But at the moment the process for a school to transform is "lengthy and complex", which has "created an extra barrier for those who wish to see integrated provision in their area."

She also pointed out that integrating schools would have financial benefits for taxpayers: "It can help reduce the cost of maintaining empty school places, it enables funding to be directed toward pupils rather than sustaining a divided school estate, and it improves sustainability, making it easier to fund the modernisation of the school estate."

In 2015 the Audit Office calculated that there were 71,000 empty school places in Northern Ireland – one fifth of the total. The Society said that "a segregated system of any type is by its nature inefficient."

The NSS has said that the Northern Ireland Department of Education should have a duty to work with schools and authorities to ensure that a school becomes integrated within five years of proposing the transition.

In 2016 the United Nations Committee on the Rights of the Child called upon Northern Ireland to promote "a fully integrated education system and carefully monitor the provision of shared education, with the participation of children, in order to ensure that it facilitates social integration".

The proposed bill would require the Department of Education to "actively promote" integration, and Armstrong said the Department should "set minimum targets for children being educated in integrated schools within the next decade."

To speed up the school transformation process, the NSS suggested that the threshold of parents required to petition for integration to be lowered, and that school governors are required to give consideration to integration at a regular interval. The NSS also proposed new mechanisms to trigger the transformation process where it was clear that segregation was causing significant school capacity problems, and also to "include the views of potential parents that are excluded from the (potentially integratable) school due to their religion or belief".

The National Secular Society said that citizenship education plays an essential part in "fostering good community cohesion and children's rights" and welcomed proposals to increase the prominence of citizenship education which it said would help Northern Irish schools meet their public sector equality duty and duties under the UN Convention on the Rights of the Child.

The consultation comes at the same time that the Integrated Education Fund have launched the Integrate My School initiative to support grassroots transformation movements, along with resources to help lobby on integrated education in the upcoming election.

On the question of teacher discrimination the NSS said that no qualified teacher should ever be discriminated against in a state school on religious grounds.

NSS campaigns officer Alastair Lichten said, "Today's schools are where tomorrow's sectarianism or tolerance will be fostered. We hope that these issues are taken seriously by all parties in the upcoming election and the new assembly acts to increase integration across Northern Ireland's schools."