Legacy of Charlie Hebdo honoured in event at Parliament 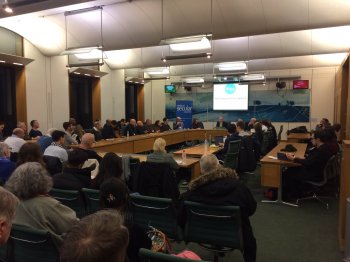 Members and supporters of the National Secular Society gathered in Portcullis House on Wednesday night to discuss the future of free speech, two years after the attack on Charlie Hebdo.

The Society was honoured to be joined by Caroline Fourest, who helped edit the 'Survivor's Edition' of Charlie Hebdo published shortly after the massacre.

She discussed the shameful treatment of Charlie Hebdo following the massacre by some UK media outlets: after the attack, Sky News cut her off in the middle of an interview when she tried to show a cartoon of Mohammed.

Those who defy Islamic blasphemy laws don't just face violence and threats, she said, but demonisation from the regressive left.

She stressed the need for secularists to condemn anti-Muslim bigotry but criticised the term 'Islamophobia', arguing that it conflated Muslims with Islam, and stifled discussion about the religion.

Introducing the event, Keith Porteous Wood, the executive director of the National Secular Society, said hopes that media organisations would publish the cartoons in solidarity with the magazine had failed.

The "heartening outpouring of solidarity, the sense of indignation and outrage, the crowds shouting 'Je Suis Charlie'" had offered a "brief glimmer of hope," he said.

"Following the attack, we could hope that perhaps liberal democracies all around the world had now finally grasped the extent, the power and the depth of the challenge and threat that had first been posed, in the western world, by the would-be assassins of Salman Rushdie, all those years ago.

"Perhaps now they had finally grasped the nature of the ancient mandate for violence that the killers had taken up.

"Maybe they had even realised that there could be no accommodation whatsoever, that defiance and solidarity were the only guarantees of values that we take for granted, but which atrophy and fade, values which can wither, rights that must be maintained and actively defended.

"But the solidarity didn't last, our collective outrage quickly gave way to bitter disputes, and bile against Charlie from those who blamed the victims for their own murder. The crowds went home."

Nick Cohen urged those present to buy Caroline Fourest's book, 'In Praise of Blasphemy', after she said that, despite it being a bestseller in France, no UK publisher would touch it. He accused people of making feeble excuses for not showing genuine solidarity with Charlie Hebdo, arguing that there were very good reasons to be frightened of publishing a Mohammed cartoon, but that few would admit that was the true reason.

Cohen also spoke powerfully on liberals' failure of Muslims by pandering to Islamists and reactionary community leaders as 'authentic' conduits to Muslim communities in the West.

Jodie Ginsberg, CEO of Index on Censorship, said that a "pincer movement" was attacking free speech. She pointed to Government proposals for 'extremism disruption orders' as one example, and criticised Tony Blair and other politicians for calling for laws against offending "religious feelings."

She said that society lacked the ability to debate productively and that whatever you did, however innocuous you think it is, somebody will claim to be 'offended'.

People went very quickly after the attack from saying "Je Suis Charlie" to, "Je Suis Charlie, but…" and too many claim to "defend free speech" but in practice out only the "kind I like."

Guardian cartoonist Martin Rowson spoke about the resistance of the paper to publishing a cartoon of Mohammed, and said that any organisation that did so would face tremendous threats, without the safety in numbers that might have been hoped for in the aftermath of the attack two years ago.

Rowson added that one of the great threats to freedom of speech was the belief that the greatest human right of all was a right to not be upset.

Jim Fitzpatrick MP, who sponsored the room for the NSS, congratulated the Society on hosting the event and said that it was inspiring to hear such a strong defence of free expression.