Ireland to consider banning schools from using religion in admissions 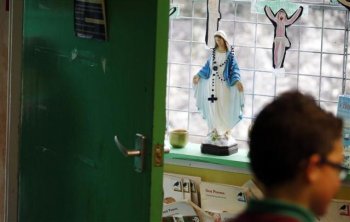 The Irish Minister for Education and Skills has set out plans to tackle the religious discrimination endemic in the Irish education system, hitting out at the unfairness of a baptism requirement for school places.

But the proposals to reduce religious discrimination in the Irish education system have been described as "deeply flawed" by Irish secularists.

90% of primary schools in Ireland are under the control of the Catholic Church, with a further 6% controlled by other religious groups including Protestants.

In his speech, education minister Richard Bruton said religious parents' wishes to educate their children in their faith should be respected but that non-Christian parents should not be unfairly disadvantaged.

The requirement for parents to baptise their children to gain a school place was unfair, he added.

The minister set out four options aimed at removing discrimination against families who don't share a school's faith, but secular campaigners have criticised all of them as inadequate.

The four options include a proposal to stop schools discriminating against local non-religious families in favour of more distant religious ones, or an option of allowing priority on religious grounds, but only when children already live within a school's catchment area.

Mr Bruton also set out how a quota system could work, with a "limited proportion of places" reserved on religious grounds.

The last option mooted is an "outright prohibition on religious schools using religion as a factor in admissions".

Education Equality welcomed the Irish Government's acknowledgement that reform was needed, but said that three of the four proposals would "continue some form of religious discrimination." Only an outright ban on using religion in admissions would remove discrimination in that area, they said.

However Education Equality spokesperson Sarah Lennon said that the public consultation was "nothing more than a delay".

Without more fundamental reform to the religious ethos of Irish schools and "a workable approach to opting out of religious instruction and faith formation, then 4 and 5 year old children will still experience segregation and exclusion during the school day," she added.

Atheist Ireland warned that the proposals could actually be counter-productive and could expand the ability of the Catholic Church to evangelise within the state-education system.

They said that mandating Catholic schools accept non-religious and non-Catholic pupils was not a solution: "Some in the Church would prefer to only teach already committed Catholics, but the Church officially sees schools as a way of evangelising minorities."

Atheist Ireland cited a Vatican document urging schools to "seize" the opportunity of a "large non-Christian presence" as part of a "tradition of [the] Church's missionary activity."