Sabbath swimming campaign succeeds, thanks to islanders and secularists 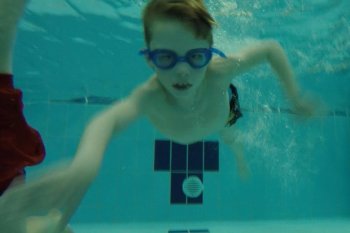 Local campaigners have succeeded in their effort to secure funding to open a popular swimming pool on Sundays – pressing the council to abandon its unpopular decision not to.

With more than 80% of the £11,400 needed raised by the campaigners, the NSS stepped in and paid the outstanding amount to ensure success for the crowdfunding initiative.

Pauline Matterson of Lewis campaign group Families into Sport for Health (FiSH) said: "We are delighted to receive the support of the National Secular Society who recognise that the FiSH campaign for Sunday opening of ISL [sports centre] has been persistently thwarted on religious grounds.

"FiSH has worked respectfully within the council's processes and procedures for the last decade in raising the issue of Sunday opening. While FiSH is a health focused, community organisation, the Western Isles has a history of Sabbath observance, and some councillors have stated that the issue of Sunday opening is one with religious connotations. Prior to the introduction of the Equality Act in 2010, the local council stated religion as a reason for the absence of Sunday operations. Recently, it has stated the reason for not opening is financial.

"FiSH is pleased to help the council overcome their stated financial shortfall. The 1550 plus members of FiSH and other supporters are hopeful that this financial contribution will be treated in the same manner as other local groups who were successful in their request for additional week day hours."

Alistair McBay, the National Secular Society's spokesperson for Scotland and vice president said, "We are delighted to be able to support these families in the Western Isles and their health initiative. As secularists, we have no objection to Sabbatarians staying indoors on Sunday and observing the Sabbath according to their custom but they need to understand that not all islanders share their religious beliefs. The local council now has no option but to open the leisure facility for the trial year.

"Thank you to all who donated and made this victory possible."

The council initially claimed that it couldn't consider opening the pool on Sundays for a yearlong trial period due to a lack of funds, but one councillor who supports the initiative said the real reason the council wouldn't approve Sunday opening was for religious reasons.

Councillor Neil Beaton said that "It was apparent from the e-mails and letters I received that preserving the Sabbath was the main objection to Sunday opening, not the financial objections that were made."

Despite the funds now being raised, the council is still being defiant. Since the fundraising campaign's success in hitting its target, the council have claimed that their block on Sunday swimming was "democratic", even though a local survey found over 70% of respondents supported opening the pool on Sundays.

They also said there still needed to be a show of "local demand" – despite the successful campaign achieving its objective.

The council are also now saying that their objections and not for "purely financial issues" and that they have "operational issues".

Now armed with the funding to pay for the pool's opening however, local campaigners will continue to press the council to abide by the wishes of the majority of the people of Lewis.

Lewis has a long history of religious fundamentalists blocking services from opening or running on the Sabbath, and Councillor Beaton said the council should distance itself from a "stifling sanctimonious Sabbatarian shroud."

In recent decades however islanders have cheered the running of Sunday ferries, dwarfing a small number of Sabbatarian protestors, and a survey by FiSH found overwhelming support for opening the pool on Sundays.