Over 40% of UK Muslims support “aspects” of sharia law 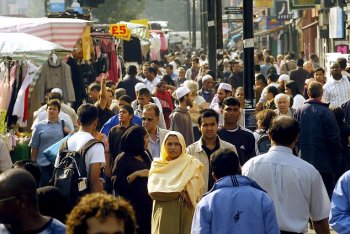 Policy Exchange survey, described as the largest study of Muslim opinion in the UK ever undertaken, has found widespread belief in conspiracy theories and significant support for sharia law.

The Policy Exchange study found that unsurprisingly "British Muslims as a whole represent an unquestionably more religious section of the wider UK community" and that "Faith clearly plays a more central role in the lives of British Muslims".

Muslims hold concerns on the NHS and the economy (among other political issues) that are normal among the rest of the population, but as other polls have shown, on specific issues there are marked differences between British Muslims and the general public.

"There are relatively large levels of support among British Muslims for the implementation of elements of Sharia law," Policy Exchange said.

35% of 18-24 year olds expressed support for "aspects" of sharia and nearly half of the over-55s supported some "provisions" of sharia.

The report noted that other polls conducted in the past had found younger Muslims were more likely to support sharia, but Policy Exchange suggested that sharia might have "diminished appeal" "in an age in which this concept has become associated with, and tarnished by, ISIS."

Just over half of British Muslims said they wanted to "fully integrate" (53%), and 37% said they wanted to integrate "on most things" with what Policy Exchange described as "separation in some areas, such as schooling and laws." 6% sought a "separate Islamic life as far as possible" and 1% wanted a "'fully separate Islamic area in Britain, subject to Sharia Law and government".

59% of young Muslims wanted full integration, suggesting some progress has been made, and the Policy Exchange report noted that this result suggested "that support for integration will increase as time goes by".

However, there were significant regional variations, and in Yorkshire and the Humber just 28% were in favour of "full integration".

40% supported gender segregated education and 41% opposed, but 44% "supported the idea that schools should be able to insist on the hijab or niqab".

Support for gender segregation decreased among younger Muslims, but 1-in-4 of 18-24 year old Muslims supported segregation by gender.

53% said they "preferred to send their children to schools with strong 'Muslim values'", compared to just 20% of the general public who preferred a school with "strong religious values".

Respondents emphasised the quality of education, Policy Exchange said, but the British Muslim conception of what "good education" meant differed from that of the general public.

15% said art and music should not be taught at school, and Muslims who lived in areas where Muslims "made up over 50" of the local population" were more likely to oppose the teaching of art and music.

The report also said that anti-Muslim attacks "have become an engrained part of the mental landscape of many Muslims, and appear to confirm the threat posed by racism" despite the fact that "such episodes remain relatively rare and unusual".

Muslims "tended to say that they themselves had not experienced racism or Islamophobia" but had stories they could "point" to, often revolving around family members.

"Without in any way wishing to deny the reality of racist and Islamophobic attacks, it is striking how, to many people, these are a mediated phenomenon," the authors noted.

There was a "pervasive sense of unease," according to focus groups, though some participants "were willing to reflect critically about the extent to which an over-developed sense of victimhood might fuel paranoia," the report said.

"Arguably, this is a product of a culture infused with an abstract sense of grievance, at least as much as it as a response to tangible, empirical realities."

91% said they are "entirely free to practice their religion in Britain."

52% of Muslims said they "did not know" who was responsible for the 9/11 attacks. 31% said the "American Government", 7% said "Jews", and just 4% said al-Qaeda. One participant in a focus group said, "There was no Jews that were in that day."

By contrast 71% of the general public say al-Qaeda was responsible, with 1% blaming "the Jews".