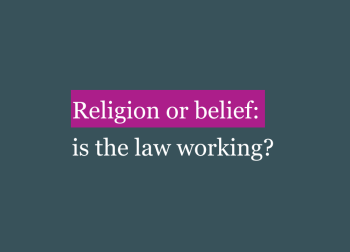 The Equality and Human Rights Commission has launched a major new report on religion and belief in the workplace, with recommendations which have been strongly welcomed by the National Secular Society.

The EHRC said that a "common sense approach to managing religion" in the workplace was needed and that existing legislation was "generally effective."

There have been repeated calls from some evangelical Christian groups for a 'conscience clause' that would allow discrimination on religious grounds against gay people and would allow religious staff to decline to serve gay customers.

The Commission rejected demands for a duty of so-called "reasonable accommodation" which would entitle employees to greater manifestation of religion in the workplace, and said that no such duty should be introduced.

Employers could already choose to make accommodations for religious reasons, the EHRC said, provided this did not result in discrimination.

The report said the law "should not be changed to permit individuals to opt out of work duties, to accord with their religious or non-religious beliefs, where this has an actual or potential detrimental or discriminatory impact on others."

The law currently struck the right balance between protecting religious freedom, and upholding the right to non-discrimination, the EHRC said.

The Commission concluded that there was therefore no need for a duty of "reasonable accommodation" and that the law should never be altered to "permit discriminatory service provision or to allow employment arrangements which could have a discriminatory impact on colleagues".

The National Secular Society has long argued that a duty of "reasonable accommodation" would effectively unpick and undermine equality laws.

Keith Porteous Wood, NSS executive director, said: "We very much welcome the acknowledgment that the legal framework relating to religion or belief should remain unchanged and that an additional duty of 'reasonable accommodation' should not be introduced.

"The report's findings give lie to the claim that Christians are being unfairly treated and we very much hope it puts to bed the false narrative of Christian marginalisation in the workplace – a view the prime minister unwisely gave credence to in Parliament just this week.

"The accompanying common sense guidance will provide clarity to both employers and employees seeking to negotiate the sometimes thorny issue of religion and belief in the workplace — and will hopefully make for happier and more harmonious workplaces."

The Commission noted that some had argued "that any service provider where the owner has a religion or belief should be able to … restrict services on the basis of sexual orientation."

It rejected this argument, saying that "Where a service is provided to the public, it must be provided to all on equal terms."

David Isaac, Chair of the EHRC, said: "Our review finds that the law works well. There are a lot of myths that have arisen due to misunderstanding of legal requirements."

The EHRC report was however critical of the extent to which faith schools can discriminate against teachers on religious grounds.

The law should be reviewed, the EHRC said, to ensure occupational requirements were genuine and that "teachers are able to pursue their careers without unjustifiable limitations being placed upon them.

The report states: "The SSFA provisions allowing voluntary aided schools to consider the conduct of teachers appear to permit discrimination because of other protected characteristics, such as sex or sexual orientation discrimination. This is not permitted by the EU Employment Equality Directive Article 4 (2) which requires that 'difference of treatment' 'should not justify discrimination on another ground'."

It also called for a review of the law in Scotland where a teacher wishing to be appointed to a post in a denominational school managed by an education authority has to be approved by representatives of the relevant church or denominational body as to their religious belief and character.

This finding was welcomed by the NSS which has long argued that the degree of discrimination legally permitted against teachers is unreasonable and unacceptable and beyond what is permitted by the European Employment Directive.

"The degree to which discrimination against teachers is tolerated in state-funded faith schools would be totally unacceptable in all other areas of public life.

"We urge the Government to take note of the recommendation to amend the law regarding employment of teachers to ensure that they cannot be unreasonably discriminated against on religious, or any other grounds, in faith schools.

"There are a very limited number of roles for which one's personal religious beliefs or practices can legitimately and justifiably be considered a genuine occupational requirement. There is an increasingly limited pool of potential staff who follow a religion at all, and this is an added complication given significant long-term problems with recruitment and teacher numbers.

"No teachers should be blocked from teaching positions in publicly-funded schools on the basis of their religious/non-religious beliefs, or practices."