Freedom of Thought report highlights the right to freedom from religion 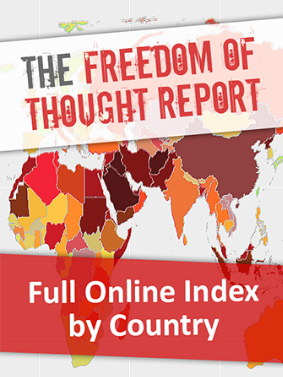 The Freedom of Thought report highlights cases of individuals who have been targeted for expressing non-religious views, for 'blasphemy' or for promoting secularism.

The International Humanist and Ethical Union (IHEU), to which the National Secular Society is affiliated, has published its fifth annual Freedom of Thought report, drawing attention to cases of individuals around the world who face persecution for their lack of religious belief.

These include Raif Badawi, sentenced to 1,000 lashes and 10 years in prison in Saudi Arabia for alleged "blasphemy", Mohamed Cheikh Ould M'kheitir, who is facing the death penalty in Mauritania for alleged "apostasy", secular bloggers in Bangladesh facing vigilante killings, and Basuki Tjahaja Purnama, the governor of Jakarta who has faced huge protests against him over blasphemy accusations.

"The IHEU report is an important reminder that the right to freedom from religion or belief is as fundamental as the right to freedom of religion, and that the same human right protects freedom of non-religious thought and non-religious belief as well; and that for some humanists, atheists, free-thinkers and the unconcerned the protection of this right can mean the difference between life and death."

Writing in the report's introduction, Shaheed sharply criticised blasphemy laws and discrimination against and persecution of apostates.

"While anyone can run afoul of these laws, and often there are allegations of the use of such laws for political purposes, these laws potentially automatically criminalize dissent and free-thinking, and victimize 'non-believers', humanists and atheists. What is even more shocking is the cruelty with which those who are accused of violating these laws are often punished– by state agents or by non-state actors, including neighbours and relatives."

According to IHEU's research blasphemy is outlawed in at least 59 countries, which punish the 'crime' with a prison term or the death penalty. 22 countries have laws against apostasy, and "at least 13 countries provide for the use of the death penalty for blasphemy or apostasy."

IHEU president Andrew Copson said "the rights and equality of the non-religious are under threat" and that "Serious damage is being done to the brand of democracy, to secularism, and there are new threats to all our liberties."

The report uses a 'traffic light' system to rate countries on discrimination against the non-religious in four sections; constitution and government; education and children's rights; family, community, society, religious courts and tribunals; freedom of expression and advocacy of humanist values.

Bob Churchill, author of the report, said: "At that most serious end of the scale, we record how numerous states continue to systematically exclude or persecute non-religious people, or suppress a range of views that include humanist values, political secularism, and critical discussion of religion. These violations affect many millions of people who are directly discriminated against by the state, are marginalized or outright persecuted socially".

The report warned that populist movements "linked to conservative religious values are attempting to (and in some cases are already succeeding) re-establish or entrench privileges for religion in the public sphere, or attempting to restrict the rights and liberties of all in the name of religious values."