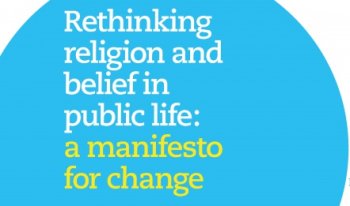 The time has come to separate church and state in order to ensure equality and fairness for believers and non-believers alike, says a major new report launched by the National Secular Society.

The report says that Britain's "drift away from Christianity" coupled with the rise in minority religions and increasing non-religiosity demands a "long term, sustainable settlement on the relationship between religion and the state".

Rethinking religion and belief in public life: a manifesto for change has been sent to all MPs as part of a major drive by the Society to encourage policymakers and citizens of all faiths and none to find common cause in promoting principles of secularism.

It calls for Britain to "evolve" into a secular democracy with a clear separation between religion and state. It criticises the prevailing multi-faithist approach as being "at odds with the increasing religious indifference" in Britain.

Terry Sanderson, National Secular Society president, said: "Vast swathes of the population are simply not interested in religion, it doesn't play a part in their lives, but the state refuses to recognise this.

"Britain is now one of the most religiously diverse and, at the same time, non-religious nations in the world. Rather than burying its head in the sand, the state needs to respond to these fundamental cultural changes. Our report sets out constructive and specific proposals to fundamentally reform the role of religion in public life to ensure that every citizen can be treated fairly and valued equally, irrespective of their religious outlook."

The report highlights state education as the area where the "most overt imposition of religion on British citizens" takes place – and calls for a "moratorium on the opening of any new publicly-funded faith schools. It also recommends the abolition of the legal requirement on all schools to provide Christian worship and an end to discriminatory admissions arrangements.

The report describes the Church of England's privileged position as "no longer tenable". It recommends that the bishops' bench be removed from the House of Lords, with religious leaders only appointed on merit along the same criteria as all other appointees, rather than the current system where bishops are given seats 'as of right'.

The report also warns that the rise of so called 'sharia courts' risks undermining the legal system. Allowing groups to opt-out of the state legal system in favour of a religious alternative "strikes at the heart of citizenship and a cohesive society", says the report.

The report also urges politicians to refrain from describing Britain as a "Christian country".

"Any approach which seeks to label the values widely shared by UK citizens as exclusively "Christian" is doomed to be out of touch with the views and lifestyles of the population", it states.

According to the report:

"Increasing secularity and the fragmentation of religious belief means the need to treat people as individual citizens rather than as members of a religion has become even more apparent. No faith-based approach from the state will ever encompass every strand of belief that exists in the UK today, and a human rights, individual-centred approach – rather than the failed multicultural or multi-faithist model – is vital for every citizen to be treated and valued equally."

The 'manifesto for change', covering every area of the Society's work, makes detailed recommendations on a broad selection of important policy areas relating to protecting human rights law and ensuring equality for all.