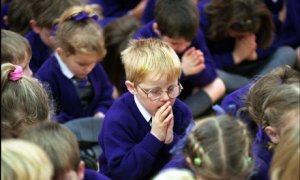 Campaigners in Scotland have agreed to "pause" their legal action on religious observance in Scottish schools, pending a consultation by the Scottish Government.

The Humanist Society Scotland (HSS) said the promised consultation was a "step in the right direction" and that the judicial review had been halted for three months by mutual agreement of both the HSS and the Scottish Government.

Gordon MacRae, chief executive of the HSS, said the Scottish Government's consultation will "revisit its guidance for schools on the basis of a wider recognition of children's rights."

"By agreeing to launch a new consultation Scottish Ministers for the first time are making it possible for young people to have a voice in the process.

"I am pleased that we were able to secure an agreement to suspend the court action for three months to allow this to happen. This will allow the consultation to take place and we will engage positively in that process to maximise the rights of young people in Scotland."

He sounded a note of caution however, warning that while the consultation was "welcome" it would not deliver the "independent right for young people" to opt themselves out of religious observance.

He said that the HSS had "been overwhelmed by the level of public support for our legal challenge."

Scottish pupils currently have no right to withdraw themselves from religious observance.

In England and Wales, where worship is a daily requirement, only sixth-form pupils are able withdraw themselves without the need for a parent's permission.

The United Nations Committee on the Rights of the Child recently urged all UK governments to repeal legislation mandating worship in schools and to "ensure that children can independently exercise the right to withdraw from religious worship at school."

Stephen Evans, campaigns director of the National Secular Society, said: "There are fundamental problems that need to be addressed, not just with the Scottish Government guidance, but the law itself.

"Clearly, where schools do hold religious observance, young people's religious freedom should be respected by them having the right to opt themselves out.

"However, neither a parental opt out nor a pupil opt out is ideal. Reforms should concentrate on making all aspects of the school day inclusive. Organised religious worship in schools is inimical to this aim."