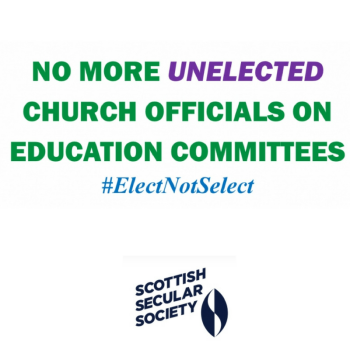 The Scottish Secular Society has launched a petition challenging the lack of democratic accountability in Local Authority Education Committees automatically including Church nominees.

Local councils must currently reserve places on their education committees for Church of Scotland and Catholic representatives, and a third place for a local religious representative.

"These appointees are immune from electoral scrutiny and do not even have to declare their outside interests. They sit and vote on these important Committees whether the elected Councillors want them or not, and hold the balance of power on 19 of Scotland's 32 Education Committees," the petition says.

"We now call on the Scottish Parliament to remove this requirement, by repealing the relevant clauses, leaving the elected Councillors free to decide for themselves what role, if any, to grant Church representatives."

The petitioners said that nothing they propose would "in any way prevent Education Committees from consulting or co-opting such individuals, if they so choose. On the contrary, their contributions would have added weight and legitimacy if their presence were by invitation, rather than imposed."

"Education Committees control a larger part of Council budgets than any other Committee. They are the ultimate employers of School Principals and teachers, as well as being represented on senior teacher selection panels. They decide on the opening and closing of schools, and whether a school should be denominational or non-denominational, and control local practice in such matters as religious education, religious observance, and instruction about sex in human relationships."

Spencer Fildes of the Scottish Secular Society, who started the petition, said that the Society's correspondence with MSPs found "widespread interest in the points we raised, with a clear majority of respondents supporting change."

"It's all the more concerning when these appointed members boast of holding 'the balance of power' on more than half of these committees, power which they leverage for their own interests."