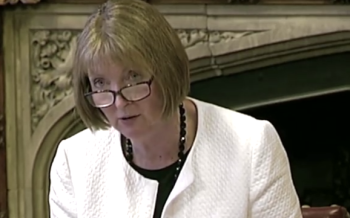 The Government has been criticised for failing to offer more detail on its long-awaited proposals for 'extremism disruption orders' – vaguely defined measures which the NSS has criticised for the damage they could cause to freedom of speech.

After receiving the Government's response to criticism from the Joint Committee on Human Rights (JCHR), Harriet Harman, who chairs the JCHR, wrote that she was disappointed the Government hadn't committed to the publication of a draft bill on the new civil orders intended to tackle non-violent extremism.

In a letter to the minister responsible for safeguarding and countering extremism, she said that it was "concerning that the Government has still not been able to identify any clear gaps in the legislative framework that any new legislation introducing civil orders is designed to fill."

The Government has promised a consultation but Harman said that "any consultation exercise which does not provide a clear legal definition of what is meant by extremism (and in particular non-violent extremism) would be futile."

She concluded that "it is perhaps unfortunate to announce a Bill in two successive Queen's Speeches which has not been fully thought through in advance."

When security minister Karen Bradley MP appeared before the Joint Committee on Human Rights (JCHR) she gave what campaigners called a "baffling array of definitions" for what the Government meant by extremism.

The Conservative Government initially proposed 'extremism disruption orders' (EDOs) after the measures had been blocked by the Liberal Democrats in coalition. Their stated purpose is to tackle 'non-violent extremism' but the Government has been unable to offer a clear definition of the 'extremism' that the EDOs would counter.

In a report on the proposals written in July, the Committee concluded that the Government appeared to have "retreated from its original proposals for Banning Orders, Closure Orders and Extremism Disruption Orders".

In response to the JCHR's report the Government said that: "The proposed civil order powers, announced in this year's Queen's Speech, are concerned with a small number of the most serious cases where extremists' behaviour threatens others and causes real harm both to individuals and communities.

"The Government will consult fully on any proposed measures, including civil orders, before they are introduced. Any consultation will set out any gaps in existing legislation that new powers are intended to fill."

The Government said its proposals would extend to "tackling all the harms extremists contribute to."

NSS spokesperson, Benjamin Jones, commented: "We await the Government's consultation but that will be a meaningless exercise unless it sets out exactly what the new orders are, how they will be activated, and unless the Government actually defines 'extremism'.

"Without a definition of 'non-violent extremism' any new measures seriously risk infringing upon freedom of expression."

A broad coalition including the National Secular Society and the Christian Institute are opposed to the controversial proposals.

The JCHR also commented on Government plans to regulate out of school educational settings providing "intensive tuition, training or instruction to children" – a move welcomed by the NSS.

The Government said that currently "the safeguards which protect children in schools and childcare settings are not mandatory in out of school settings, and children are more vulnerable to harm."

"Our proposals to regulate them are therefore aimed at ensuring that action can be taken where there are genuine concerns that they are failing to ensure the safety and welfare of children."

The Committee warned that there were "grave concerns around Government proposals for a regime of compulsory registration" but the Government argued that it was considering how to ensure its proposals were "targeted" and "proportionate".