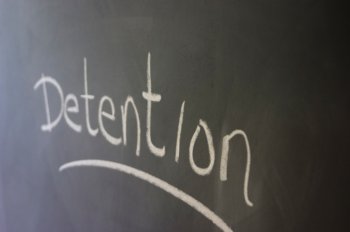 A group of non-Catholic students in a Scottish school have been punished with a week's worth of detentions after they refused to attend a religious service.

Pupils at Taylor High School in New Stevenston were instructed by the school to attend Patron Day Mass with Bishop Joseph Toal. The local paper reported that the mass was also to serve as a memorial service for former members of staff who had died.

But several non-Catholic students said they didn't want to attend because they were not practising Catholics.

One sixth form pupil was quoted by the Motherwell Times saying: "Although pupils are usually forced to go, there [are] not usually consequences for not being there and I believe it is unfair to have forced religious observance towards many pupils who may not be religious, me included.

"When I was 11 I did not have the choice of which school I would go to. To now move would be pointless, I should just be able to have an enjoyable last year, without being forced into detention for a whole week and banned from the social area."

The school said that not attending a compulsory religious event was truancy.

Acting head teacher Nicola Daley said: "Regrettably, a small number of pupils, who had attended school in the morning, opted to truant in the afternoon and miss the service.

"The pupils have been subject to school discipline as a consequence of their actions."

After the event the school tweeted: "Many thanks to @ToalJoseph for leading us in prayer today. It was a wonderful day for our school."

Stephen Evans, campaigns director of the National Secular Society, said: "It is really outrageous that students, particularly sixth form pupils, should be punished for not sharing the faith ethos of a school.

"Religious freedom includes the freedom to not have a religion and it's scandalous that faith schools can get away with showing such scant regard for young people's rights and freedoms. Schools are not homogeneous worshipping communities and it's time they stopped acting as if they were.

"Where schools do include acts of worship within the school day, pupils should always be able to opt themselves out."

In June this year the UN Committee on the Rights of the Child urged the UK to repeal laws requiring the provision of 'broadly Christian' worship in schools and called for pupils to be given the independent right of withdrawal from any religious worship that is held in schools.

The Humanist Society Scotland recently launched a judicial review against the Scottish Government over its refusal to allow sixth form student to opt out of Religious Observance at school.