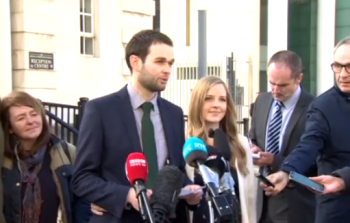 A bakery firm which cancelled an order for a cake with the slogan "Support Gay Marriage" has lost its appeal against the ruling that they had unlawfully discriminated.

The Court of Appeal rejected their appeal that they were being forced to make a political statement they did not agree with.

In the appeal the bakery said they were being forced to print a message they did not agree with, but the court said that "the issue of forced speech only arose because the appellants chose to provide" a customised cake service.

The court found that "The fact that a baker provides a cake for a particular team or portrays witches on a Halloween cake does not indicate any support for either."

The case was initially brought about on behalf of Gareth Lee, an LGBT rights activist who placed an order with Ashers Bakery for a cake with the words "Support Gay Marriage" printed on it.

Though the order for the cake with the personalised message was initially accepted, several days later Mr Lee was contacted by Karen McArthur of Ashers Bakery who said they would not be able to make the cake because the slogan went against their religious beliefs and that she should not have accepted the order. Mr Lee was given a refund.

The bakery contended in their appeal that they objected specifically to the slogan "Support Gay Marriage" and were not discriminating against LGBT customers. The bakery said they did not know what Mr Lee's sexual orientation was when he placed the order, but the court found that the original ruling of direct discrimination was correct.

Northern Ireland's Lord Chief Justice Sir Declan Morgan sided with the initial ruling that found Ashers had "discriminated against the respondent directly on the grounds of sexual orientation contrary to the Equality Act (Sexual Orientation) Regulations 2006".

The Belfast Court of Appeal ruled that it was the word "Gay" which "prevented the order from being fulfilled" and that Ashers Bakery would have fulfilled an order for a cake with the slogan "Support Marriage".

"The reason that the order was cancelled was that the appellants would not provide a cake with a message supporting a right to marry for those of a particular sexual orientation. This was a case of association with the gay and bisexual community and the protected personal characteristic was the sexual orientation of that community. Accordingly this was direct discrimination," the judgement said.

The Attorney General contended that the bakery were required to "produce a political message with theological content to both of which they objected on the grounds of their own religious belief and political opinion".

They were therefore "at a disadvantage" compared to those holding pro-gay marriage views, he argued.

Karen McArthur told the court: "as part of my faith I believe it would be sinful for me to say or do anything which has the intention or effect of promoting homosexual sexual relations or same sex marriage."

But the court concluded that the legislation treated Ashers Bakery fairly, and that "Anyone who applies a religious aspect or a political aspect to the provision of services may be caught by equality legislation, not because the legislation treats their religious belief of political opinion less favourably but because that person seeks to distinguish, on a basis that is prohibited, between those who will receive their service and those who will not."

Considering calls for a so-called 'conscience clause' to allow types of discrimination against LGBT people on religious grounds, the judges' ruling said that "The answer is not to have the legislation changed and thereby remove the equality protection concerned. The answer is for the supplier of services to cease distinguishing, on prohibited grounds, between those who may or may not receive the service."

Gay rights campaigner Peter Tatchell said the verdict was "a defeat for freedom of expression."

However, writing on the BBC website, legal commentator Joshua Rozenberg said there was "nothing in the court's decision requiring Ashers or any other business to promote a view with which the company's directors disagreed."

Ashers Bakery was supported in the case by the Christian Institute.