Secularism 2016 Conference: Secularism ‘on the frontline of the most important issue of our time’ 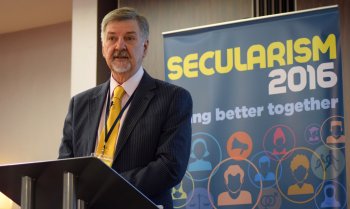 The National Secular Society kicked off its 150th anniversary celebrations with a conference on Saturday 3 September covering everything from collective worship in schools to community cohesion in a secular democracy. The conference was an opportunity to reflect on everything the NSS has achieved in 150 years of campaigning, and consider the significant challenges ahead.

One of our most important successes in recent years, and one of the earliest priorities of the NSS from the beginning, was the abolition of the blasphemy law in 2008. In opening the conference – Secularism 2016: 'living better together' – NSS president Terry Sanderson took a moment to note this formidable achievement, but warned of the need to guard against a return to blasphemy laws "through the backdoor".

Though most of our work naturally focuses on the UK, Terry also spoke to the conference about our international work and the exciting news that the NSS has been granted special consultative status with the UN Economic and Social Council (ECOSOC). This status is an acknowledgement of the NSS's important work in promoting freedom, fairness and human rights and will provide the Society with a platform to address the UN Human Rights Council, ECOSOC, and the General Assembly on human rights issues of concern to secularists.

Following Terry's introduction, the conference opened with a concise and fascinating history of the NSS and our founder Charles Bradlaugh from the historian Deborah Lavin. She talked about the priorities of the NSS as a young organisation, and the raucous public meetings of its local branches.

The first panel of the morning was on secularism and human rights, and our executive director Keith Porteous Wood was very pleased to be joined on stage by the Turkish opposition MP Safak Pavey, and Tehmina Kazi, formerly of British Muslims for Secular Democracy.

Tehmina spoke powerfully against using the law to stymie freedom of expression and the toleration by some universities of gender segregation. She said this was never acceptable. In a varied and informative speech, she turned next to the situation of LGBT Muslims, speaking about the "ostracism" they could face from their communities and the cases where some are forced into marriages.

Safak Pavey spoke next, describing her home country Turkey as "the only example of a secular Islamic society". But she said in recent times that "God's role in politics" had been "rekindled". Secularism was essential in promoting human rights, she added, noting that the cultural cliff opened by "political religion" was "deeper than ever".

Following Safak and Tehmina, Keith gave a wide-ranging address on the issues that confront secularists and the NSS today, including entrenched religious privilege in our institutions, while the Church of England "is becoming less and less representative of the country". While the Church was in long-term decline, he stressed that the established church must not be replaced with a multi-faith model, as some have advocated. Special status for religion in our society does not apply only to Christianity, and he noted with alarm the worrying growth of sharia and the feeble reaction to this phenomenon from figures and groups as varied as the Law Society and the former Archbishop of Canterbury Rowan Williams.

We were fortunate to be joined on the day by several secularist Muslims speakers. Keith said in his speech that "too few" people have the courage to speak out against sharia and that he took care never to refer to it as 'law'.

Our keynote speaker Jacques Berlinerblau gave a challenging and thought-provoking speech, urging the secularist movement in the United States and Europe to pick its battles carefully. He invoked President Kennedy, and played a short clip of the president saying "I believe in an America where the separation of church and state is absolute".

Secularism is often misrepresented, Berlinerblau said, by those who paint it as anti-religious or inimical to religious freedom. Separating church and state is not comparable to state atheist regimes such as the Soviet Union, and Berlinerblau stressed the need to address misconceptions (and deliberate misrepresentations) about what secularism means.

His speech was a fascinating tour through the history of secularism, from Bradlaugh to burkinis, before heading over the pond again to America where he went from Jefferson's letter to the Danbury Baptists to the modern Democratic Party's ambivalence towards political secularism.

What models of secularism are there around the world today? In a fascinating discussion he explored American versus French secularism, and asked whether India had anything that might be considered 'secularist'.

He reminded the audience that religious minorities have often been great proponents of a secular state – a case the National Secular Society increasingly makes as Christianity is consistently found to be a minority religion (compared to the non-religious majority).

One of the most powerful audience questions came from a Somali secularist who said she had a "target on my back." Berlinerblau said that secular Muslims he knew were "besieged" by death threats and that the genuine moderates were "terrified" to express their views. "When can we get support from the other communities?" the Somali campaigner asked.

After midday many highlights of the conference came from the education panel. NSS campaigns director Stephen Evans talked about one of the aspects of the Society's work which takes up much of our time – helping parents who find religion imposed on their children at school. Stephen highlighted one recent example where we assisted a Muslim family whose child had been assigned to an Orthodox Jewish school. In a school system including over 7,000 faith-based schools, such absurdities are inevitable and much of our time is spent helping parents, pupils and teachers who confront every day the effects of our antiquated settlement on religion's place in the education system.

While there are many successes to celebrate from 150 years of campaigning, there is much work left to do. Nowhere was this made clearer than in the education panel. The archaic requirement for collective worship – against which there has emerged a formidable consensus – was the most striking example of where change and wholesale reform was needed. Little had changed in that area since 1944, putting teachers in the difficult position of ignoring a law they know to be wrong, and in many cases think to be immoral.

Stephen noted that our concerns about children being left to languish in illegal faith schools were finally being taken seriously, but through a security perspective, rather than through the prism of the child's right to an education, which should be the priority.

We were joined on the education panel by Paul Rowe of Educate Together, the group we named Secularist of the Year 2016. The education group opens schools based on the principle of inclusion and equality of esteem for all pupils regardless of their religious background or lack of one. Their schools have proven to be wildly popular in Ireland and have recently spread to the UK. Paul said that in the week running up to the conference alone Educate Together had opened nine new schools. Educate Together models the type of education and admissions policies we would like to see rolled-out nationally across our entire state education system. It was inspiring to hear again about secular education in practice.

The last panel of the day was on the vitally important topic of Islam in a secular democracy. There was a great deal of excitement about hearing our speakers on this topic – Raheel Raza, Douglas Murray and Maajid Nawaz.

Raheel's presentation began with a hard-hitting video from the Clarion Project on levels of support for theocratic principles and terrorism among Muslims around the world, before taking the floor to say that reform within Islam could only come if there was separation between state and religion. She spoke about the important work of the Muslim Reform Movement.

Maajid Nawaz opened by describing his move away from radical Islamism to secularism, and said he was proud to be an honorary associate of the National Secular Society and that Muslims had to speak out in favour of secularism. He said that "Islamism must be intellectually terminated" and blasted the regressive left for defending Islamism and theocracy in the naïve belief that they are defending freedom of religion. As Raheel discussed, Maajid also said that "secularism is the prerequisite to the liberalisation of attitudes in Muslim societies".

Our final guest speaker was Douglas Murray, who thanked those who spoke out against Islamism, despite the risks to their safety, including Richard Dawkins, Peter Tatchell and Raheel Raza. He said that the West was "stumbling" through a struggle with Islamism that nobody had predicted, but that now, decades after the fatwa against Salman Rushdie, European publics had drawn totally different conclusions about Islam than European elites.

Returning to the topic of sharia, he said it was "certainly unhelpful" for the Government to appoint imams to the inquiry into sharia law – a concern the NSS and many other organisations have raised directly with the Government.

Douglas concluded by saying that the National Secular Society was on the frontline of the most important issue of our time.

After the conference was over we heard speeches at our celebratory gala dinner from all of our living former presidents. Barbara Smoker, Denis Cobell, David Tribe, and our current president Terry Sanderson discussed in their toasts the evolution of the NSS from an atheist campaign group to the strictly secularist organisation that it is today. There was much to celebrate, they said, but many difficult challenges lay ahead in a country that was drastically unlike the Britain of 1866, when the NSS was founded.