Protect the rights of the non-religious in education, says British Institute of Human Rights 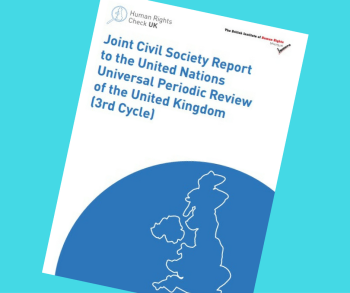 The British Institute of Human Rights (BIHR) has endorsed several recommendations made by the National Secular Society, in a submission to the United Nations.

The BIHR launched its Joint Civil Society Report, which is formed from evidence given by 175 civil society organisations across England, Scotland and Wales, including the NSS, and which has now been submitted to the United Nations for the UN's Universal Period Review of the UK.

The NSS also made a separate submission to the UN for the Universal Periodic Review.

The BIHR report reiterated a number concerns regarding state education raised by the NSS, including faith schools' ability to discriminate on religious grounds. The report said:

"There are concerns about the ability of state-funded religious schools to lawfully discriminate against non-religious families by selecting pupils based on religion, and the impact of plans to lift the current 50% selection limit which generally applies to new English schools.

"In England, the Government has opposed the equal inclusion of non-religious worldviews in statutory school religious education, despite a High Court case last year showing this is required."

The BIHR recommended that the state should ensure "non-religious worldviews form part of the statutory school religious education curriculum."

The NSS advocates for fundamental reform of the way religion and belief is taught in schools to ensure that non-religious worldviews are not side-lined.

"All children in state schools are required to take part in collective worship (Christian in character); in England and Wales this is daily. There are concerns about the inadequacy of withdrawal rights, and that children with sufficient understanding are not able to withdraw themselves."

The Institute recommended that the Government should ensure "children are free to withdraw from religious observance".

On Sex and Relationships Education (SRE) the BIHR said that several submissions by civil society groups "raise concerns about the content and voluntary status of SRE. This echoes conclusions by a UK Parliamentary report that 'young people consistently report that the SRE they receive is inadequate' and by the Special Rapporteur on the Right to Education that SRE should cover sexual health."

The Institute said that the Government should "Provide adequate and compulsory Sex and Relationships Education to young people".

The National Secular Society said in its written evidence to the BIHR that the UK Government's failure to address the uneven provision of SRE in schools, after concerns were raised by the UN Committee on the Rights of the Child, was of great concern.

Aside from education, the NSS' evidence also included our concern over the disturbing rise in hate crime over recent years, of which 6% is related to religion, the BIHR noted.

The civil society submission said that the Government should ensure "robust data collection on hate crime, and take steps to ensure that groups most likely to be affected are better protected."

This is something the NSS called for in its written evidence, and has previously lobbied the Government to pursue. Last year the NSS met with a minister in the Department for Communities and Local Government to call for more sophisticated tracking of hate crime statistics and trends, to try and better understand and reduce religiously-motivated hate crime.

A key theme across all of the evidence received by the BIHR was concerns regarding the proposed repeal of the Human Rights Act with many civil society organisations expressing worries that a new Bill of Rights would offer weaker human rights protections.

Speaking at the launch, David Isaac, Chair of the Equality and Human Rights Commission, said "any changes to human rights law mustn't weaken the protections we currently enjoy".