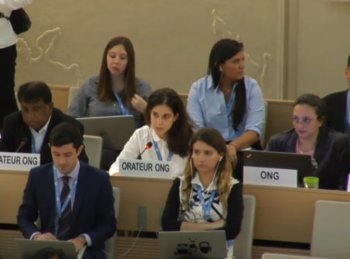 The National Secular Society has spoken out at the UN Human Rights Council (UNHRC) to criticise the UK Government over its failure to tackle caste based discrimination, as the UN has repeatedly urged it do.

Josephine Macintosh (pictured right), speaking on behalf of the National Secular Society, told the UNHRC that the UK government had made "grossly inadequate" progress toward outlawing caste discrimination.

"In 2012, the Universal Periodic Review (UPR) recommended that the UK 'put in practice a national strategy to eliminate discrimination against caste' by adopting the Equality Act of 2010, which prohibits such discrimination.

"It reminded the UK of its human rights obligations, including the [Committee on the Elimination of Racial Discrimination's] General Recommendation 29 and recommendations of the Special Rapporteur on Contemporary Forms of Racism.

"Sadly, the UPR's recommendation did 'not enjoy the support of the United Kingdom'.

"Four years later, the CERD issued its Concluding Observations on the UK in which it also recommended that the UK invoke Section 9(5)(a) of the Equality Act 'without further delay to ensure that caste-based discrimination is explicitly prohibited under law' and for victims to have access to effective remedies."

The Equality Act allows the Government to make caste an aspect of race protected from discrimination under the legislation.

"The UK has failed to take this action. Instead, it stated that it hopes for 'the development of case-law that provides protection.' This is grossly inadequate."

Rather than explicitly outlawing discrimination based on caste as the UN has recommended and parliament has voted for, the Government recently announced a public consultation – many years after it first promised one, and long after it was urged by the United Nations to take legislative action.

"This is concerning as it risks so-called higher caste and those wishing to discriminate on grounds of caste to oppose the legislation," the NSS said.

"We therefore call on all member states to encourage the UK to legislate to implement its international obligations in respect of caste, in line with its human rights obligations, as recommended by the UN, and indeed as required by the UK Parliament."

The intervention can be read in full here: https://www.secularism.org.uk/uploads/nss-intervention-at-uncrc-sept2016-caste.pdf