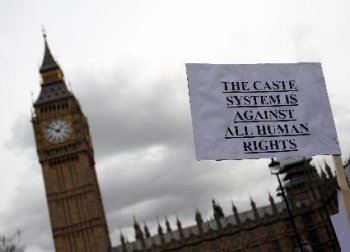 The National Secular Society has criticised the Government for "stalling" on caste discrimination after it announced plans for a consultation "on the issue of caste" despite already being under an obligation to outlaw such discrimination.

David Cameron's coalition Government initially promised a consultation in 2013 which it failed to deliver. Parliament subsequently committed to make caste a protected characteristic (as an aspect of race) under equality law via a clause in the Enterprise and Regulatory Reform Act 2013

Just last month the UN Committee on the Elimination of Racial Discrimination called on the UK to "invoke Section 9(5)(a) of the Equality Act 2010 without further delay to ensure that caste-based discrimination is explicitly prohibited under law and that victims of this form of discrimination have access to effective remedies".

Following years of delays and obstruction, Keith Porteous Wood, executive director of the National Secular Society, said that a consultation "at this stage is just a further attempt to stall implementing what parliament has instructed the Government to do."

Mr Wood continued: "By launching the consultation rather than taking action to outlaw caste-discrimination, the Government are displaying contempt for Parliament, the UN and our international obligations.

"In launching this consultation the Government are giving the oppressors the opportunity to seek to veto legislation to protect the oppressed. We invite the Prime Minister to consider how this approach to equality and Human Rights matches up to her commitment on taking office: 'For me, equality is about fairness. It is simply wrong for anyone to face discrimination or abuse because of who they are.'"

The Government Equalities Office said: "The government is to undertake a full public consultation on the issue of caste and the Equality Act 2010.

"A key aim of the consultation will be to obtain the views of the public on whether additional measures are needed to ensure victims of caste discrimination have appropriate legal protection and effective remedies under the 2010 Equality Act.

"Before taking any decisions, the Government will carefully consider the responses to the consultation, which will run for 12 weeks from its commencement date."

Victims of caste discrimination must currently rely on what Mr Wood described as "ambiguous and untested case law".

In July 2016, shortly before Theresa May took office, the National Secular Society urged the new Government to honour the will of parliament and the UK's international obligations by explicitly outlawing caste-based discrimination.

There is cross-party support for legislation to outlaw caste-based discrimination in the House of Lords.