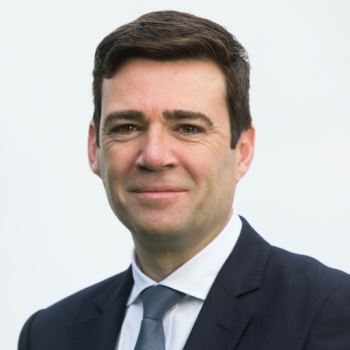 Speaking at a fringe meeting at the Labour Party Conference, Burnham said that the police had a "possible conflict of interest" when dealing with anti-Muslim hate crimes, and that the Government "almost legitimise" anti-Muslim "behaviour".

Burnham compared the Government's anti-extremism strategy with burkini bans in France, describing Prevent as "an approach to policy that singles out one community for different treatment".

According to a report in the Independent Labour's Shadow Home Secretary said: "There's a lot of people in this country not necessarily at risk from 'Islamic extremism' but it's far-right extremism. That's what we're talking about here, but where is the statutory duty on that? … There are so many issues with it that it needs a root and branch review."

In reality, the Government's guidance on Prevent says: "Our Prevent work is intended to deal with all kinds of terrorist threats to the UK. The most significant of these threats is currently from terrorist organisations in Syria and Iraq, and Al Qa'ida associated groups. But terrorists associated with the extreme right also pose a continued threat to our safety and security."

Burnham then told the group that there was a need for "trusted third parties for reporting hate crime".

"If people have a feeling that the bodies that they would go to are also simultaneously being asked to monitor them there's a possible conflict of interest there isn't there?"

Because of Prevent, Burnham said, "people won't feel able to come forward and say exactly what's happening to them and their family if they also feel they're being monitored in some way.

"Is there then a need to create trusted third parties for reporting hate crime so that it isn't the case that people have to go directly to the police or [possibly] the council?"

Mr Burnham suggested that Prevent was causing anti-Muslim attacks, and that the Government was effectively legitimising this.

He said: "If governments are doing things to almost legitimise things in some way by saying this community does need to be treated differently, it does need to be watched at a local level, because there's danger here in terms of behaviour, that is highly problematic."

The NSS responded that "Andy Burnham's cheap posturing on Prevent and comments about the police sow division and distrust. Whatever you think about Prevent, Mr Burnham's specific suggestion – that there is no duty to deal with far-right extremism – is simply false.

"It is particularly incendiary for Mr Burnham to imply that the British state somehow legitimises anti-Muslim behaviour and even attacks on Muslims, which does seem to be the implication of his comments.

"Having groups that monitor and attacks and collect data is valuable, provided they collect reliable information on actual attacks and crimes, rather than including examples of vaguely defined 'hate speech' on social media. But that is very different to saying, as Mr Burnham did, that these groups should substitute the police so that Muslims don't ever need to 'go directly to the police' or local authorities."

Burnham was speaking to the controversial group Muslim Engagement and Development (MEND). MEND's chief executive Sufyan Ismail has accused Tell MAMA, a group which collects data on anti-Muslim attacks, of being "pro-Zionist" and said Muslims couldn't associate with it because it was "making all sorts of comments we might not agree with when it comes to homosexuality".

Before the General Election Sufyan Ismail claimed that "It's perfectly OK under UK law to hate Islam and Muslims, it's not a problem…if you're Muslim, [the law says] you can take liberties big time, that's why women are getting their hijabs ripped off."