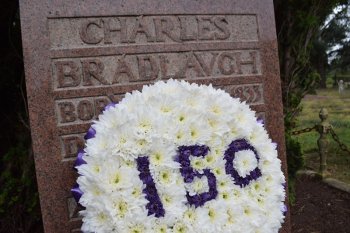 Two commemorations have been held this month to celebrate the life and work of Charles Bradlaugh, who founded the National Secular Society 150 years ago.

Members of the NSS met at Bradlaugh's grave in Brookwood cemetery, near Woking, to pay their respects and hear a short speech from current NSS president Terry Sanderson celebrating Bradlaugh's achievements.

Mr Sanderson, the twelfth president of the Society, said that "Bradlaugh's contribution to Parliament, when he did eventually get in, was considerable, particularly the Oaths Act" which allowed MPs to affirm rather than swearing a religious oath.

"We can be confident that Bradlaugh would have been astounded to discover that Parliament was clearly delighted, albeit a century and a quarter after he left it, to accept the National Secular Society's proposal to commission a new bust in his honour. It will be placed prominently in the Houses of Parliament in November.

"I am proud to be the twelfth president of the NSS. So, today on behalf of you all, and the Society, we leave this wreath in Bradlaugh's memory to mark the 150th anniversary of another of Bradlaugh's achievements, of course, the founding the National Secular Society.

"Let us all express our gratitude for his creating our organisation. Over that time, the achievements of the NSS, and secularism, have been huge, significant well beyond the UK, and enduring. Surely he would have been proud that 150 years on, the NSS and the concept of secularism is assuming even greater, and growing, relevance all over the world."

Bradlaugh was elected to Parliament in 1880 for Northampton, but was unable to take up his seat on account of his atheism and his request to affirm rather than swear a religious oath.

He was briefly imprisoned in the Clock Tower under Big Ben, and waged a six year campaign to allow non-religious people elected to Parliament to take their seats without swearing a religious oath.

The commemoration in Northampton was held at Bradlaugh's statue which was raised by public subscription soon after Bradlaugh's death – but which is now standing on a traffic island just outside of the city centre. Ambitions to reposition it more centrally have been abandoned because of the fragility of the sculpture. It is made from terracotta, so moving it might cause catastrophic damage, and there are fears that a more central location would make it an attractive target for vandals.

The Bradlaugh Society also spoke at the event of their plans to protect and renovate Bradlaugh House in Lahore, Pakistan, which was originally built in Bradlaugh's honour for his championing of Indian independence. The building is now in a state of dilapidation and plans to renovate it are proving an uphill task because of the political situation in Pakistan.

As part of the NSS' 150th anniversary celebrations the Society hosted its recent conference, where attendees heard from the historian Deborah Lavin on Bradlaugh and the NSS' early history.